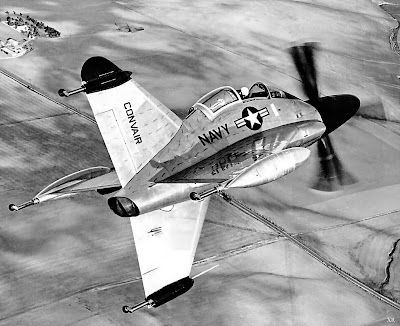 ... Convair (Consolidated,Vultee Aircraft) was a huge aerospace company of the Cold-War 'military-industrial complex'. They were building all sorts of weapons systems for the government. Bombers, fighters, rockets and assorted weird concepts like the above VTOL (vertical take-off and landing) fighter.

As discussed previously on this blog; VTOL aircraft were a long and frustrating obsession of the military. The Air Force wanted them to reduce dependence on expensive and vulnerable runways and the Navy lusted for an alternative to costly 'sitting-duck'  aircraft carriers. [note: helicopters, because of the laws of aerodynamics are limited in speed and range; great at the up and down but not very good at dog-fighting)

Problems of engine power and the nearly impossible task of landing 'tail-sitters such as the 'Pogo' and the Lockheed 'Salmon' stymied any useable developments.Still the vision of fleets of these muscular mix-o-matics squatting hidden in the backyards of suburbia was an intriguing fantasy. "Hey mister! Mom sent me out to see if you'd like some lemonade!"

It was not until much later that the undauntable and innovative British aerospace industry developed the  'Harrier' and a VTOL fighter was put into production.