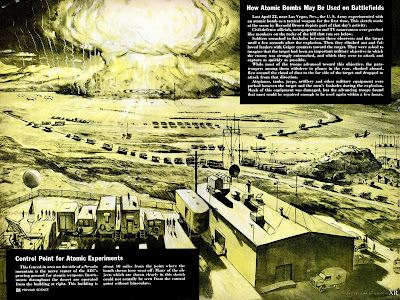 ... in the early years of the Cold War the USA enjoyed a very large superiority in both number of atomic weapons and delivery systems. It seems that military planners saw a war between the Soviets and NATO as inevitable. Using atomic bombs to counter the overwhelming numbers of Russian and Chinese conventional forces was at the center of Western tactics for fighting WWIII.

This would account for the large and ongoing public relations effort to show how infantry and armor could fight on an 'atomic battlefield'. The average person did, and still does, regard atomic warfare with a mixture of ignorance, rumor and downright superstition. (Not to mention a healthy sense of doom and dread.) This was not a favorable climate for the men whose daily job it was to map out and find the funding for the coming apocalyptic showdown.

So test after test involved placing infantry in slit trenches as close as possible to ground zero. After the detonation they would scurry out like so many ants and swarm over the radioactive site. Then quickly withdraw; minimizing their exposure to radioactivity. The military went out of it's way to assemble 'composite' forces from many combat units so that a widespread number of GI's could return to their home base saying "see, I got nuked and there's nothing to it!". These were the good old days of atomic testing. If you were a Senator, Congressman or industrial VIP you could easily get an all expense paid vacation to Nevada and a front row seat for atom splitting demonstrations.

The 'Red' Chinese took it all a step further and claimed that the dangers of fallout were an Imperialist propaganda lie. Which was not very encouraging to US planners relying on the concepts of 'deterrence'!