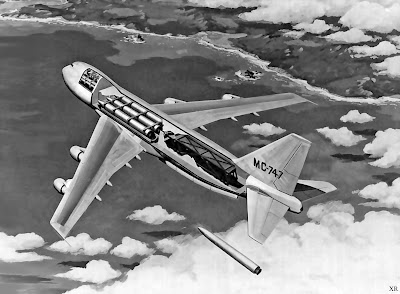 ... in the never ending search for a 'survivable basing mode' for nuclear missiles the US Air Force considered launching Minuteman missiles from aircraft! The concept was that a portion of the ground based ICBM force could be converted and carried aloft in giant cargo planes. Through aerial refueling and rotating crews these flying missile bases could stay airborne for days at a time. Such a system would be almost impossible to track and target. Since 'airborne alert' flights of bombers, on routine patrol carrying nuclear weapons, had been discontinued in the 1960's because of accidents; this would likely have been a system used only in a 'heightened state of readiness' alerts (as in: we think WW3 is goin down).

Although never adopted, feasibility tests were carried out and a missile was launched from C-5 'Galaxy'.  image credit- upship