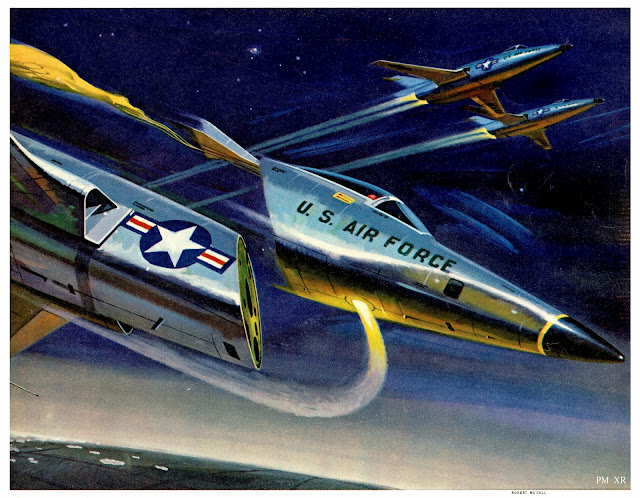 ... back in the day - engineers were worried about how to eject a pilot from an aircraft traveling at supersonic speed. Conventional wisdom, and unfortunate experience, suggested that the wind-blast would kill, or seriously injure him. So for the next several decades they set about trying to figure out a way to detach the cockpit part, from the fuel and bombs (flaming-explodey) part. None of the designs worked very well and ran counter to the concept of wanting an airplane that did not come apart! Today; pilots that fly really high (U-2) or really fast (SR-71) wear what are essentially spacesuits that are rugged enough to afford decent protection. The fighter jocks don't go supersonic all that often- and if they do; and get a missile up their tail-pipe - then it's the Martin-Baker ejection seat - or the Wiley Coyote finale. So just don't get shot down when you are going fast!


... in the 1950 movie 'Chain Lightning' much of the drama centers arounf developing just exactly that sort of ejection system. (can't think of a less likely casting as Humphrey Bogart as a test pilot) Used to be that you could watch the whole movie on YouTube. But the studio pencil pushers are now too greedy to grab a few more bucks out of a 67 year-old movie!

Hi. I've been trying to find out where this image came from. What aircraft is it? Can you help?