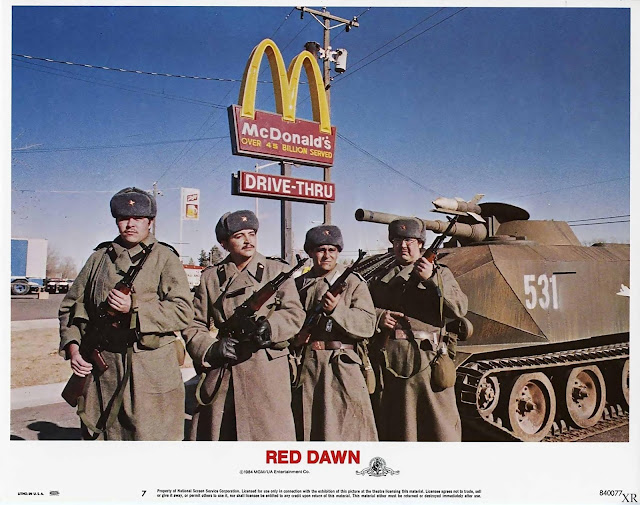 ... in the heyday of the Regan era (1984) the movie 'Red Dawn' was released. Basically a souped up made for TV movie. But it hit a resonant nerve in millions of teenage boys who fantasized that battle with the Evil Empire of the bear would bring them glory... and even possibly sex! And who can resist the idea of Russkie paratroopers blowing-up your high school?

At least it was far more believable than the remake!

A persistent idea... When I was in high school, in 1974-1976, I was in the JROTC... basically we were two types of kid: those who wanted a career in the military, and those who wanted to avoid gym. Both categories participated in active discussions of what would happen if an invasion of our city, presumably by the amphibious forces of the Reds, occurred. We figured that in that sort of national emergency, we would be issued firing pins for our M-14s... And ammo. Heck, we kept them real clean and were pretty good at taking them apart and reassembling them... And we were all proficient with the bolt action .22s we used on the basement range.
Anybody invading our city would have to face the George Washington High School JROTC.