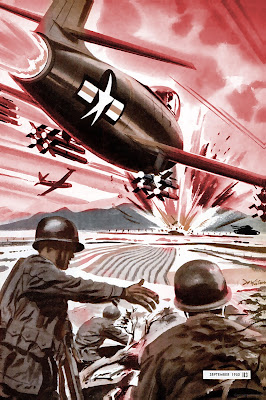 ... it's 1950 and the shooting part of the Cold War gets underway. It's a 'test of wills' using
'conventional weapons' on the far away Pacific peninsula of Korea. American leaders realize that the short lived comfort of being the only ones with atomic bombs has given way to an unhappy balance of 'mutual assured destruction' between them and the newly nuclear USSR. It is the evaporation of the dream an American 'pax-atomicus' - where we can fearlessly vaporize all evil foes.

The US must turn to modern and expensive upgrades of the old fashioned blood and guts weapons. The war in Korea is a rude 'wake-up call' to the fact that America and it's Allies must commit to a large 'peace-time' 'conventional' military in addition to it's nuclear forces.