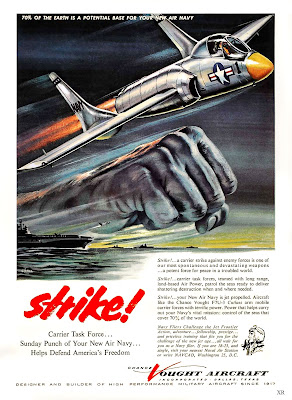 ... we may wonder about the wisdom of today's military in choosing weapons systems.
But in the 1950's they were cranking out turkeys as fast as they could get them off the drawing boards!

The 'Gutlass Cutlass' was one such debacle. It suffered from the common complaint of lousy jet-engines. Not enough thrust, unreliable and with a tendency to 'flame-out' in the rain!

But then again; the venerable P-51 Mustang of WWII started out as a dud- until the British put in their superb 'Merlin' Rolls-Royce engine.

I love the Cutlass! Really, the airframe would have been fine with the right engines, and there were design elements that were far ahead of its time. The delta wing, tail-less design, composite skin, etc... I have had the priviledge of working on the restoration of one- definitely different!

... it was a beautiful airplane!