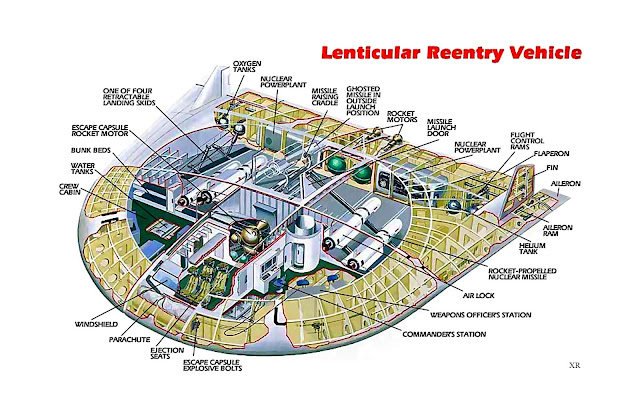 ... before the 1963 'Test Ban Treaty' and 'The Outer Space Treaty' the idea of throwing atomic bombs down on your enemy from orbit seemed like a groovy idea! Fears of bombs from outer-space, or even the moon, were part of what fueled the early 'Space Race'.

... the above concept of a manned, orbital bomber, goes down as one of those pieces on the chess board of constantly shifting atomic weapons systems. Bigger and better ICBM's were cheaper and did not require a bathroom.

... of course, banning nuclear weapons from outer space was one of the best ideas of the twentieth century! It eliminated a whole new arena of cold-war dangers and kept space exploration on a more friendly 'Star Trek' sort of footing. It also nixed the chance of using nukes for space-based defensive systems like President Reagan's Strategic Defense Initiative (better known as 'Star Wars')


[Zorching an enemy missile at the top of it's ballistic arc in space with a big H-bomb is pretty effective. You don't need to make a bulls-eye; just fry it with x-rays from your big atomic firecracker.]

The mad-scientists had to find more complex and less effective technologies like particle beams, plasma lasers and the Easter Bunny..