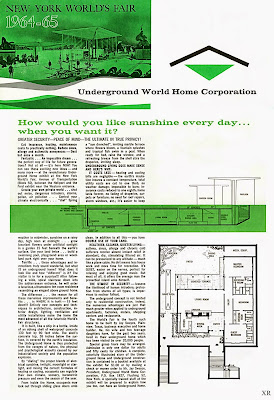 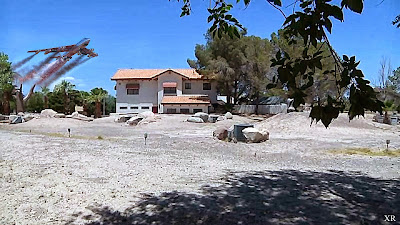 ... view of the above ground 'house' and environs. Nevada landscaping is already fairly post -apocalyptic. 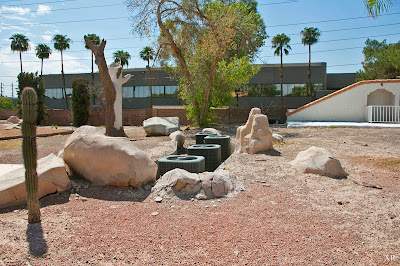 ... artificial rocks and trees partly camouflage ac and exhaust vents. Make not to contractor to harden with reinforced concrete box structures! The office building in the background housed Henderson's business concerns and could be accessed from a tunnel.

... here begins the first installment in our salute to the late captain of industry Jerry Henderson and his palace of a fallout shelter!

... the links at each post will provide most of the background information. But to sum it all up quickly: Jerry was an enterprising fellow who started selling the idea of large, comfy retreats from Doomsday with a walk-through exhibition at the 1964 World's Fair. This personal was built by Jerry in the 1970's in LasVegas. Jerry died in 1980 and the shelter with it's land and above ground dwelling went to relatives.

... recently- through a foreclosure, the 'estate' has seen the light of day!

... what we are seeing is a 16,000 sq ft hardened room 26 feet below level.
It has been built and extensively decorated to give the impression of a suburban home and guest house with surrounding yards, gardens and pool. Murals on the walls depict favorite pastoral scenes from the Henderson's travels. There is an ambient lighting system which can simulate different times of the day or evening complete with clouds and stars in the 'sky'.

God bless you Jerry Henderson for giving true substance to the best of Dr. Stranglovian fantasies!

... now we have to wonder how many other of Jerry's 'Underground World' projects were contracted and remain behind secret vault doors across America?!

* ... as an important reminder of FACT: although this 'shelter' was built and equipped to house up to ten people completely independent from the surface for one year; official estimates of fallout radioactive 'half-lifes' allow shelter 'decant' after less than a month.