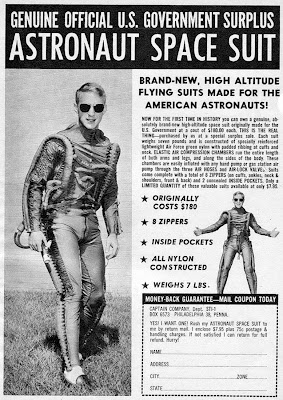 already tried writing to the address- sold out 45 years ago.
1 comment: 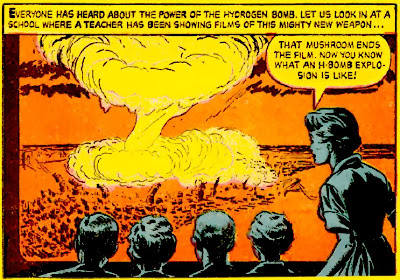 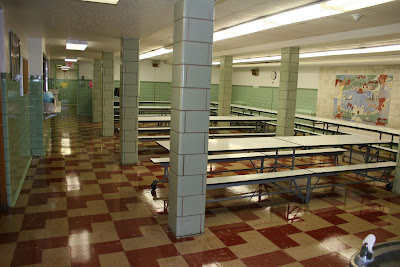 Where I'd spend my eighth birthday fighting off Atomic Zombies.
This was the cafeteria under my grade school. I have no doubt that it also doubled as a bomb and fallout shelter. If we could pan to the right a little there'd be Rod Serling "Little Jimmy Vaughan thought this was going to be just another day in second grade..."
3 comments: 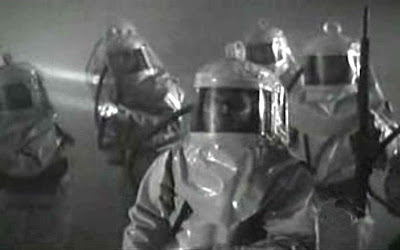 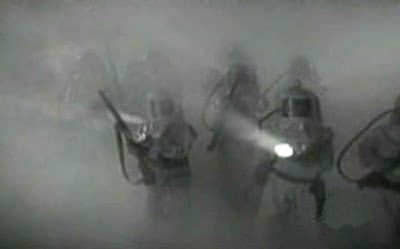 Hollywood radiation suits. These are screen caps from "The Deadly Mantis". The 200 ft praying mantis these guys are fighting was not born of atomic testing, just a prehistoric delinquent frozen
in a glacier. They're always so cranky when they get thawed out!
At the movies finale the pesky insectoid is cornered in the Lincoln Tunnel and killed with big hand grenades filled with Raid. [No kidding.] In which case these guys are well protected because these are not radiation suits. These are 1950s chemical protection suits, used by hapless rocketeers who got to fuel primitive missiles with fun stuff like nitric acid, benzene and anything else that was super-corrosive and explosive.
As far as I can find there never has been a garment that will protect it's wearer from hard radiation- nasty gamma rays handed out by pulsing glowing reactors and such.
An effective anti-radiation suit would need to be lined with lead and lots of it. Think of that half a bullet proof vest the dentist plops over you when he's going to shoot you full of x-rays. Now imagine a whole set of pajamas of the stuff. Can't even move in the thing, let alone fight monsters with a flame thrower!
But these, hope there's no leaks or I'll dissolve, freeze and burn-up, suits look just great and made appearences in many of the sci-fi movies of the era.
---------------------------------
Nasty stuff that radiation. Can't see it, taste it, smell it or rely on B grade science fiction movies to tell you what to do about it. Oh well. Hand me another can of that Raid will ya?
--------------------------------------------
sorry about the poor picture quality- 1957 was a good year for movie monsters!
No comments: 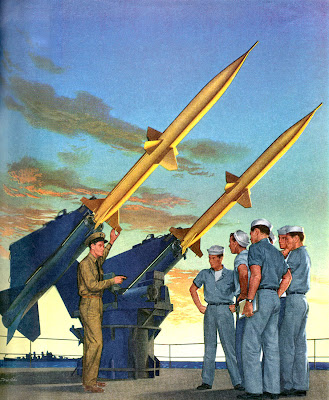 The Military Industrial Complex has provided us with some wonderful illustrations.
These are surface to air anti-aircraft missles.
-------------------------------------
It's my guess that if the Defcon level is high the conventional warheads were switched out for small 'nukes'-
1/10 to 1 kiloton range. Same size was used on air-to-air aircraft mounted missles.
That's explosive equivalent to 100 to 1,000 tons of TNT. That's a lot of whallop on the end of that not so big missile.
"Hey, when the bad-guy's bombers are planning on dropping H-bombs on you and the 30 square miles of the Atlantic your aircraft carrier task force occupies, fleet air-defense wants a sure kill as far away as possible. Now which one of you swabbies wants to be the first to try arming
a nuclear device?"
---------------------------
* a large percentage of the thousands of warheads stockpiled or deployed at the height of the Cold War were small low-yield "tactical" weapons as described above. So there- you sissies!
No comments:

not a view you want. 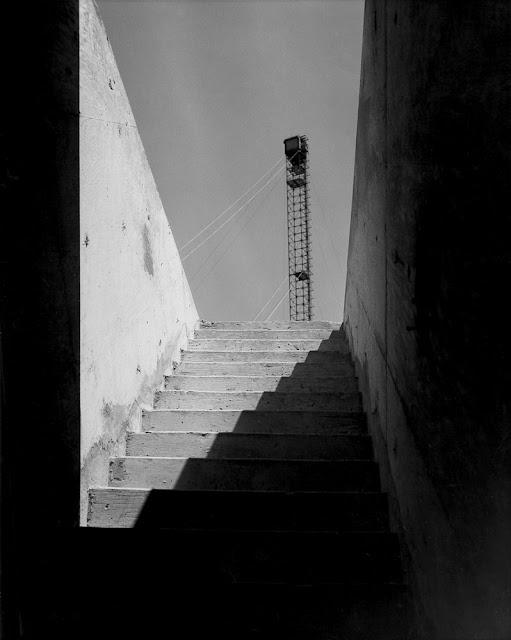 Looking up from stairs of a test bomb shelter. Shot tower visible.

Operation Plumbbob used the tallest towers of all the tests. Some of them over 600 ft high. The structure on the top is called the "cab" and housed the weapon. Putting a weapon on top of a tower provided a more controlled experiment. Dropping them from airplanes, although done, always provide the possibility of a "miss".... oops!
Many of our NATO allies, who did not have atomic weapons, came to our tests and built various types of shelters to see how they would stand up to an actual blast. This one was built by the West Germans.


"Let's see, I think the way to the press viewing area is up these stairs and...OH SHIT!"
No comments: 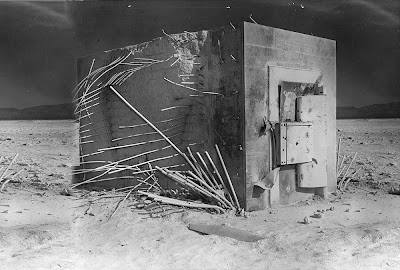 Yep, if you want to ride her out real close, looks like a bank vault is the place to be!


... here is a post about a company that bragged about their bank vault surviving the blast at Hiroshima! 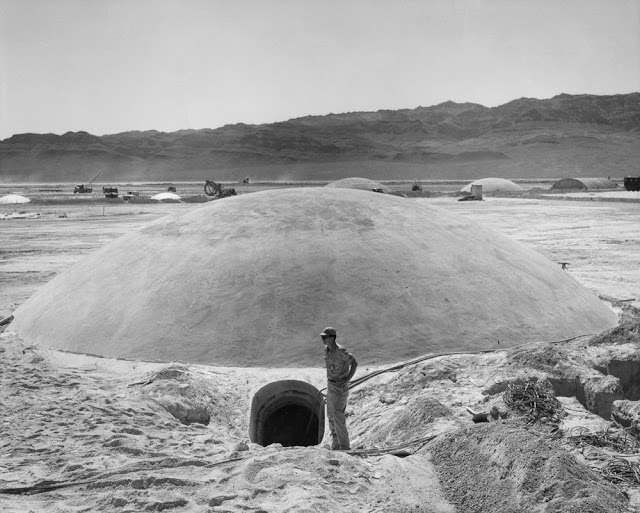 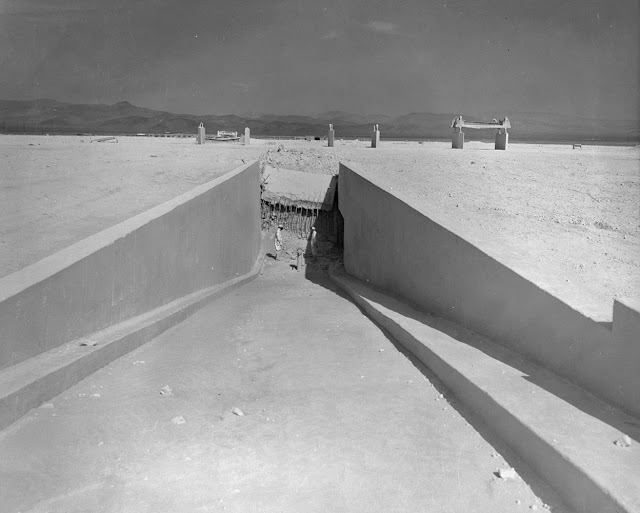 One of the many shelter structures constructed for the Plumbbob tests was an underground parking garage. [Yes, you heard me right.] With urban areas prime targets it seemed to make sense to study modifying underground parking facilities so as to be used for blast protection and fallout shelters.
The upper photo shows the drive down entrance to the underground parking deck after the test. Although the retaining wall facing the blast collapsed the rest of the structure, with it's buried 36 inch walls of reinforced concrete, remained intact.
The lower photo shows the entrance to the garage. The 3 foot thick blast door is in its retracted position. Information was a little vague just how this door worked but it was said to open easily after the blast. Important if the shelters occupants did not want to end up like King Tut. Dust off the ramp and drive out! I suppose you wouldn't have to stop to pay the incinerated lady in the glass booth. Oh well, she never seemed very happy anyway.
What a great location for a post-apocalypse movie or video game. All the suburban housewives who had driven into the city for a shopping trip, now living in their '55 Buicks deep underground, fighting with the marauding atomic mutants for the dwindling supply of candy bars.
Somewhere out there in the Nevada Test Site the parking garage is still there.
Why tear it down? How do you tear it down? It's tough enough to survive an atomic blast near ground zero. It's radioactive. Besides, someday we might need the parking.
1 comment: 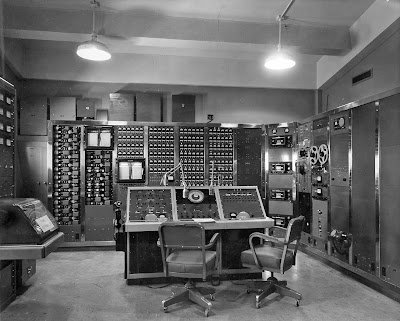 Boy, if I was going to set off atomic bombs I'd sure choose a swell layout like this!
Two big microphones on swing arms, squeaky steel chairs, tons of amp meters, knurled bakelite knobs for days- and when the atomic mutants attacked- you could call the MPs on the rotary dial phone and then breakout the carbines from that locker over on the left! gee whiz !
----------------------------------
list of "shots" Operation Plumbbob: http://www.nv.doe.gov/library/films/fulltext/0800021_22.htm
No comments:

Let's take a look at that face again.
No comments: 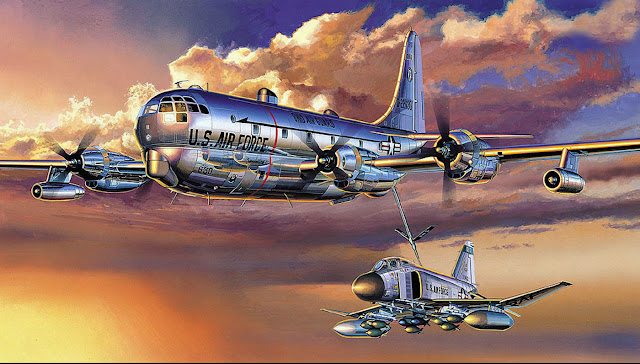 "you guys give Green Stamps?" 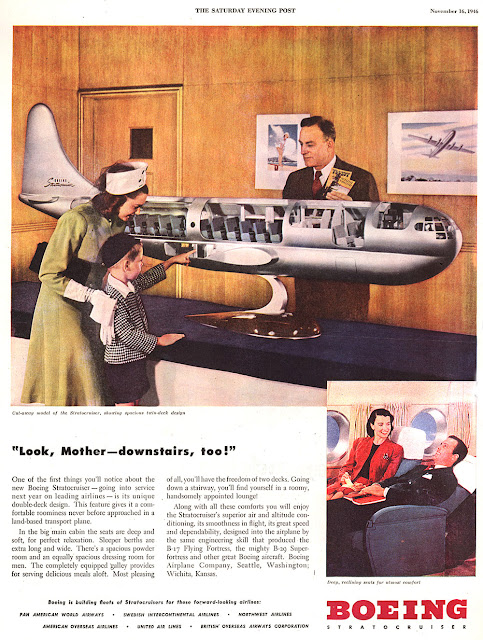 Airliner "It's got a downstairs- but no wings!" 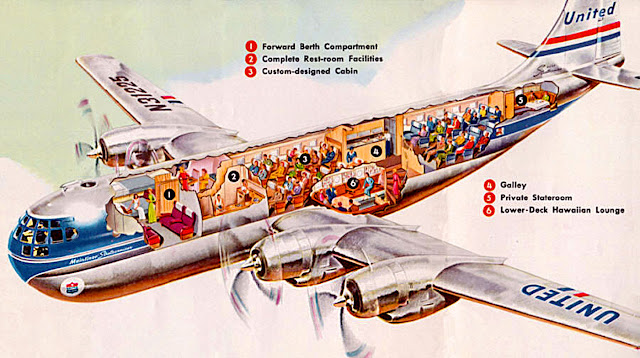 And now a really ugly Cold War airplane. If "necessity is the mother of invention" than this is one of her more unattractive offspring!

Range, the distance your bombers and fighters could travel to a target and return, was everything. [This is also one of the reasons intercontinental ballistic missiles proved much more practical in throwing H-bombs at your enemies. No deposit, no return]
What we see in the gorgeous Academy Model painting at the top is the KC-135 Strato-Tanker.

In the first years after World War II, Boeing's "Cadillac of bombers", the B-29 Superfortress saw prodigious service. She was the only bomber capable of lugging the very heavy, and few, atomic bombs that S.A.C. had. During the Korean War she saw a repeat of her service as a conventional bomber. Boeing took the basic wings, engines and tail of the B-29 and injected a bunch of steroids into the fuselage. This inflated Superfortress morphed into the C-97 military transport and the Boeing 377 Strato-Cruiser civilian airliner.

The C-97 morphed into the KC-135 tanker [after a night of hard drinking]. The Strato-Tanker had the modern "flying boom" innovation in the rear which an operator could guide into the opened receptacle of the waiting... hey, this is a family blog!
OK kids, look at the picture and you'll get the idea.

The KC-135 Strato-Tanker was a WWII airplane living in the Jet-Age. She roared along at full throttle while her trailing [er... suitors] fluttered about at near stall speeds. Often the KC-135 pilot would go into a shallow dive to gain more speed. Over 80 aircraft were even fitted with two outboard jet engines as seen in the painting.

The Stratotanker served all the way into the 1970's gradually being replaced by her faster all jet, and less dumpy, sister the Boeing 707 conversion with the same name. The last piston driven Strato-Tankers were phased out of Air National Guard service after they started wearing pasties and too much make-up.
-------------------------------
http://en.wikipedia.org/wiki/KC-97
1 comment: 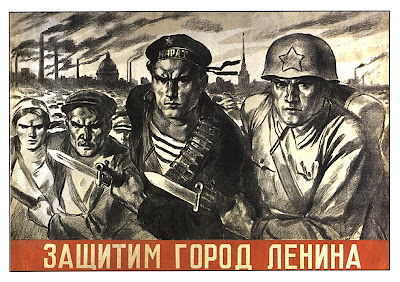 back to the Union of Soviet Socialist Republics 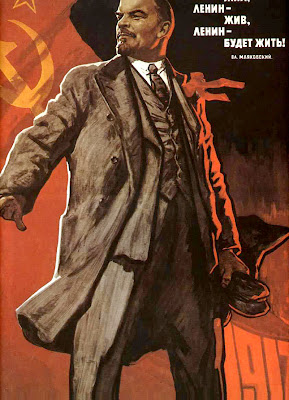 Hey, he's almost smiling! Lenin must like the feel of the winds of change blowing through his beard. 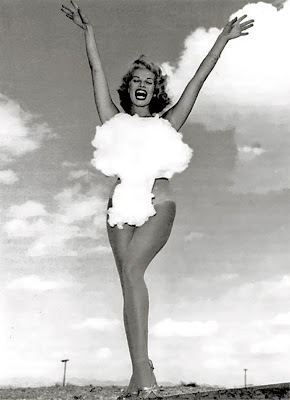 "Casandra Carsons of Las Vegas was voted Miss Atomic Test by the 350th Bombardment Group. 'Now that's a special weapon I'd like in my bomb bay' said an unamed S.A.C. spokesman. Miss Carsons said she'd gladly give her all for her country and volunteered to
have her mega-tonnage dropped on any enemy target. Gdansk and Leningrad have asked to be first strike options!" 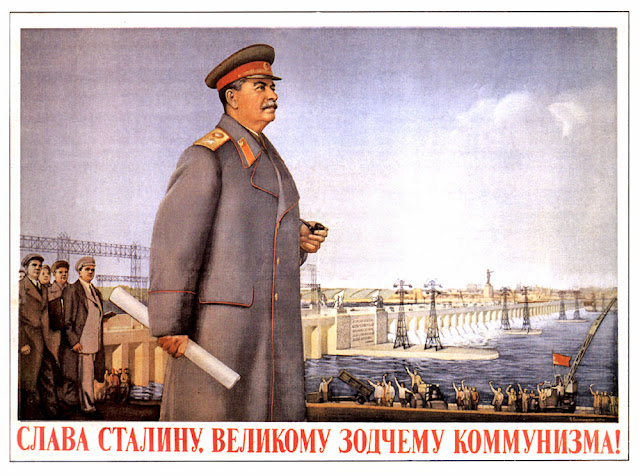 "Don't stop waving until the artist puts his brush down- do you want to be shot?" 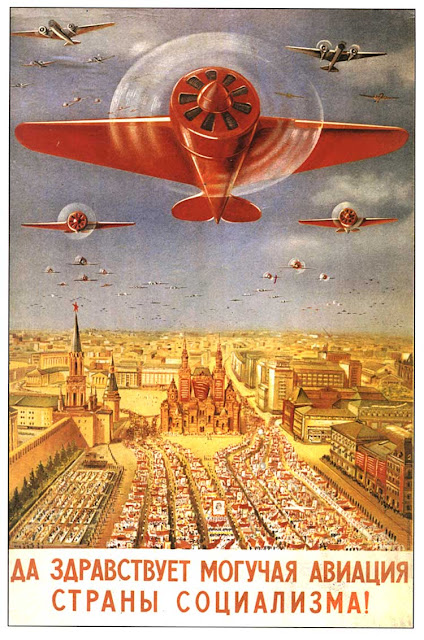 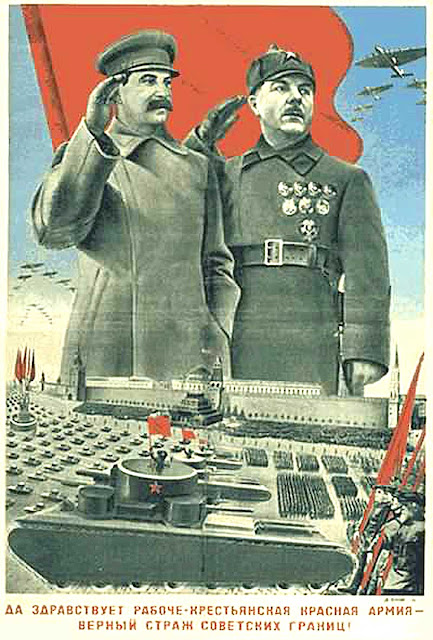 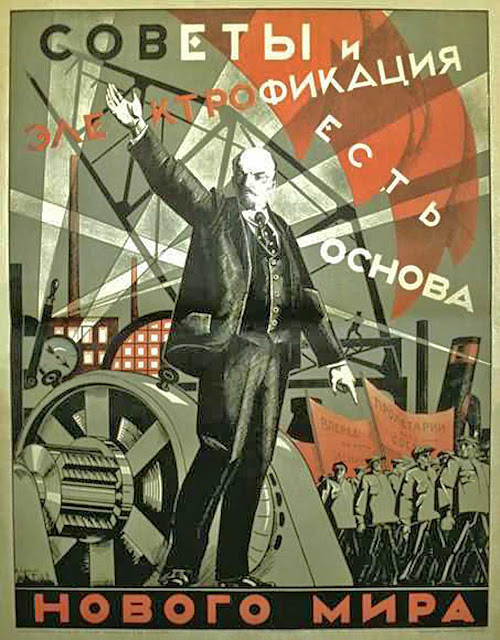 Lenin does interpretive dance- has anyone ever seen this guy smile?

In the color and font division of the propaganda war the Soviets had us beat hands down.
"That's straight tens for the Russians on modernist, negative space usage. Bad news for the Americans who seem to be stuck in colloquial realism. Boy,that's gotta hurt!"