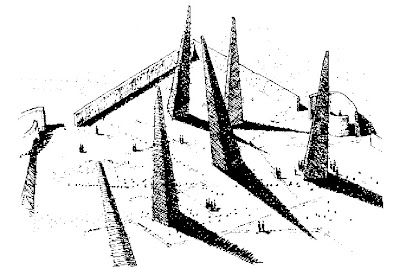 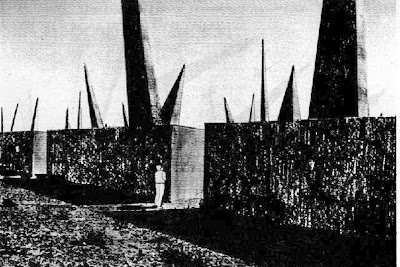 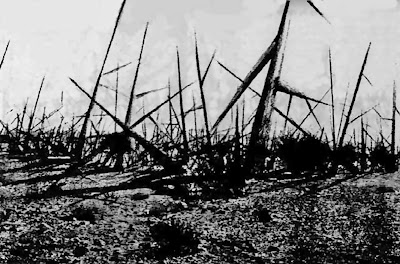 ... we here at Atomic Annihilation love the bizarre and the macabre. Why else would this blog exist?

In the beginning of the 21st century the Department Of Energy was hoping to create a long-term storage facility for highly radioactive waste deep under Yucca Mountain in Nevada. This facility would have served as the grand waste dump for used atomic power plant fuel rods, left overs from atomic bomb manufacturing and other nuclear doo-doo.

Unlike good old fashioned fallout; this sort of radioactive material is highly refined [enriched] and/or cooked in atomic ovens [atomic piles] to make it super-duper radioactive. Most of it is plutonium.

Fallout from WW 3 would, in most cases, run-down [decay] in a mere two weeks. This nasty stuff will take 10,000 years or more to become safe. Right now there is lots of it- mainly fuel rods, bubbling away in 'containment pools' in the backyards of atomic power plant locations. There are also all those pieces and parts of the nuclear cauldrons in which it is made that become irradiated to a very unfriendly level in the whole process. This is the sort of night-marish stuff that overly gung-ho military designers suggested be packed around [salted] with Hydrogen-Bombs to produce a 'doomsday shroud' of undiminished radio-active fallout. It is what makes large areas around Chernobyl still uninhabitable. Saner minds prevailed and no such bombs were ever produced. But the concept became common folklore and good material for end-of-the-world movies- including our beloved "Dr. Stranglove'

Back to the wastelands of Nevada. After spending billions of dollars to poke holes in and in various ways play with the Yucca Mountain site the do-gooders and others of reasonable sanity squashed the project. Fortunately, for we of the bizarre and macabre,  there is a similar project near Carlsbad, New Mexico. The  WIPP [Waste Isolation Pilot Project] where the hole poking and sand-castle making is still going on!

So, aside from all of the political hot potato "Here you take it! ... No, you take it!" of where to put it - the question of how to warn the far future inhabitants of Earth that there is god-awful stuff buried here produced a very strange and eerie 'art contest'.

How do we of the present make a 'sign' that will warn people of the far-future? How and what do we build it out of? What symbols will translate to a vastly different human culture? Keep in mind Egypt's Great Pyramid of Giza has been sitting around for a mere one quarter of the time-span we are talking about.

Sandia Labs, those wonderful people that give us the best nuclear weapons that money can buy, commissioned a study and put together something called 'The Futures Panel' to study the problem. [Now that would have been a cool job!] These experts came up with concepts like 'foreboding boulders' and 'menacing earthworks'. In addition to EPA requirements [yes, the EPA has rules about how to warn the next 400 generations] there was also an aesthetic urgency.

"A marker system should be chosen that instills awe, pride, and admiration, as it is these feelings that motivate people to maintain ancient markers, monuments, and buildings."

Not only does it have to warn our Neanderthal or dome-headed six-fingered cousins of the far-future ... it has to look 'awesome'!
This is all the solid core of great science-fiction. I am more jealous than ever. Just imagine sitting around the on a desert night slurping government paid for Margaritas with your fellow 'Futures Panel' members and arguing the merits of a laser illuminated mile-wide skull and cross-bones made of Iridium! "Dude - we'll get Sting to compose continuous play music of fore-boding-ness!"

Okay kids, sharpen your crayons and let's get drawing! 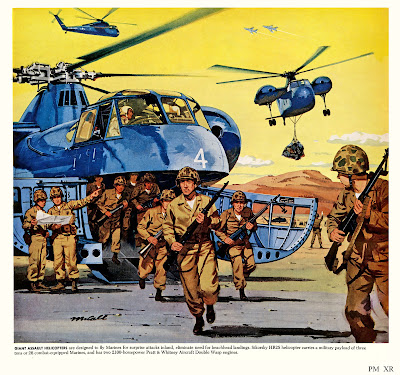 ... foreboding the agonizing years of the Vietnam War this promotion depicts the rapid transport and insertion of US Marines by Sikorsky CH-37 helicopter. The military development and use of rotor-aircraft, pioneered in the Korean War (1950-1953), has become a standard of 'vertical war' begun by paratroopers in WW2. 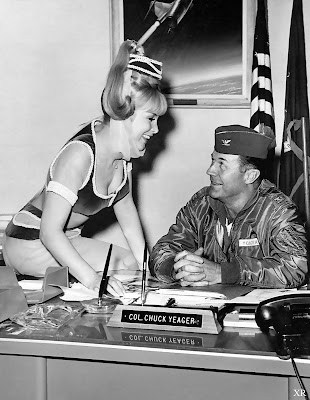 ... TV star Barbara Eden of I Dream of Jeannie poses for a publicity photo of famous test-pilot Col. Chuck Yeager. The Colonel had made a cameo appearance on the show.. 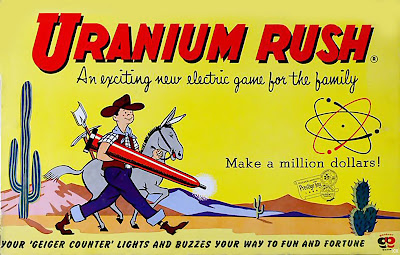 ... as the USA feverishly worked to build huge stockpiles of atomic weapons the need to find and mine Uranium ore skyrocketed. Modern day prospectors set out for 'them thar hills!' in a 'uranium rush'. Deposits of the mildly radioactive ore ( it had to be refined many times for bomb production) were plentiful in North America. Less so in the Soviet Union. 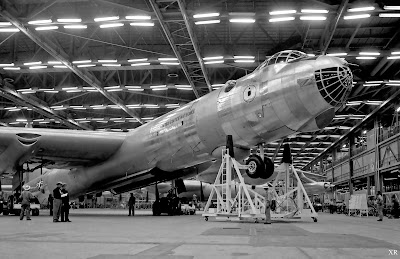 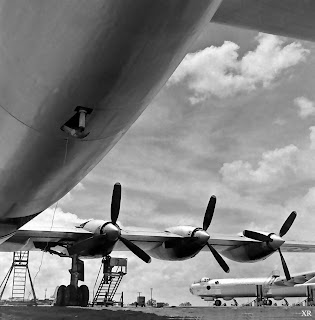 ... the first true 'Intercontinental Bomber': built for the USA's Strategic Air Command the B-36 was designed during WW2- when fears that England would fall to the Nazis prompted dreams of a bomber that could fly to Europe and back non-stop!

Expensive, temperamental and increasingly vulnerable to Soviet fighters it was replaced in the late 1950's by jet bombers that could be refueled in flight.

... the AV Kid never passes up a chance to
post this clip from his favorite Jimmy Stewart movie! 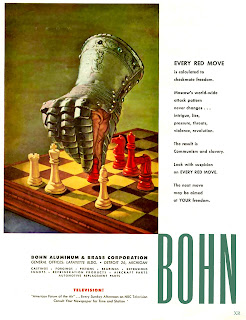 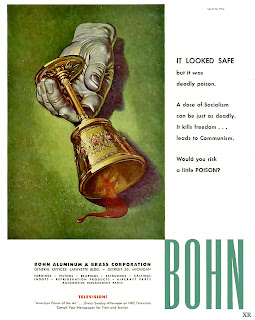 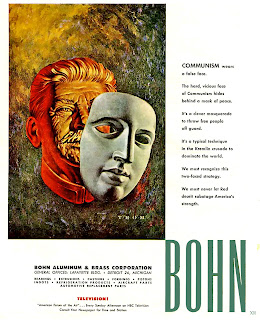 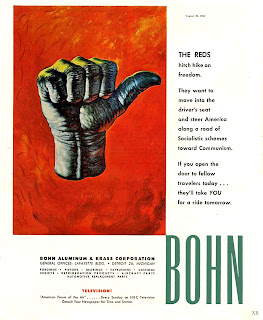 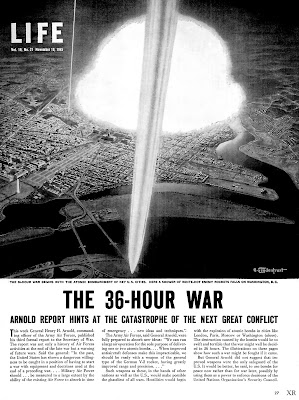 ... my jaw dropped when I found this sensationalistic warning of a possible Atomic War in an issue of LIFE magazine - dated November 19, 1945!  Just a few months after the World War II ended with the atomic bombings of Hiroshima and Nagasaki the head of the US Air forces, Gen. 'Hap' Arnold, lays out in remarkable accuracy the future dangers of a war fought with nuclear tipped ICBM's. 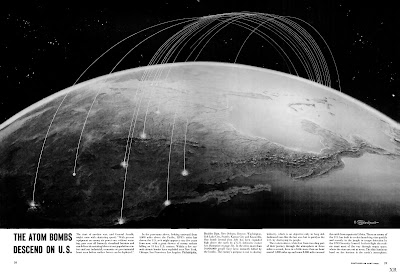 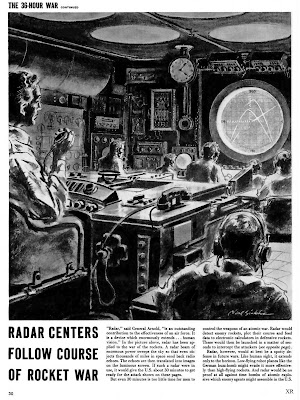 ... in 1945 RADAR (RAdio Detection And Ranging) was still pretty whiz bang, high tech stuff. Searching outer-space for incoming rockets was at least a decade away. This illustrations reminds me of scenes from the 'B' science fiction classic 'Fiend Without a Face' . The AV Kid has the whole movie here.  In the movie the search for atomic powered Radar has the side-effect of producing  invisible brain sucking monsters - of course!


Wonder if 'Hap' Arnold didn't want to tell us about that? 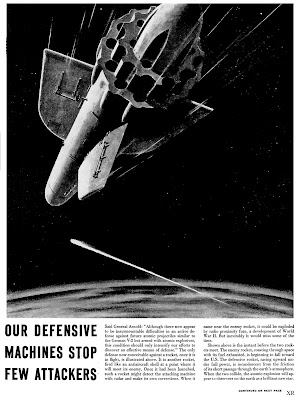 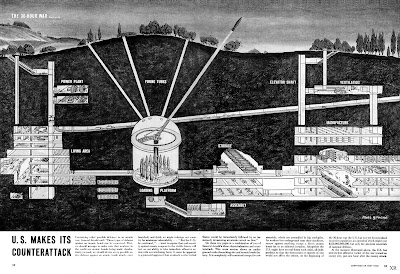 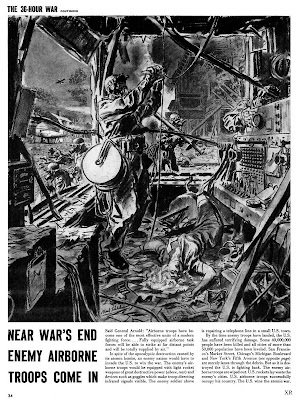 ...LIFE magazine was never shy about including a buxom blond for reader appeal! 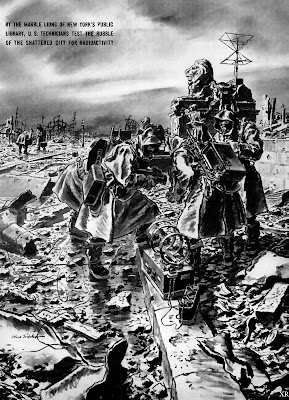 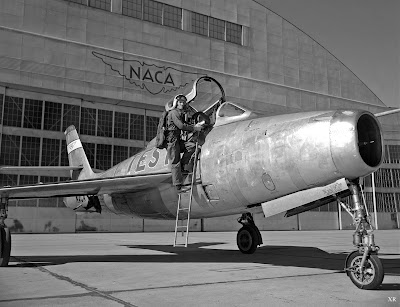 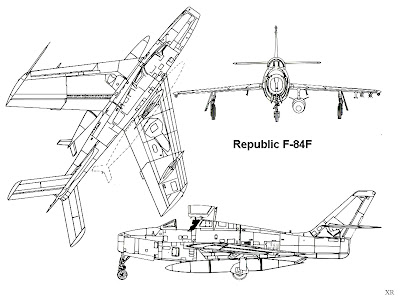 ... and now a word from our other sponsers! 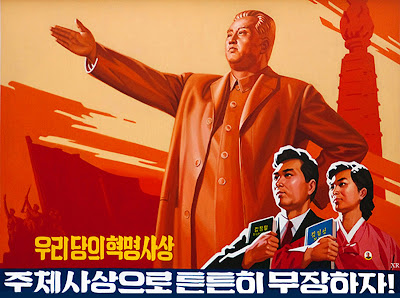 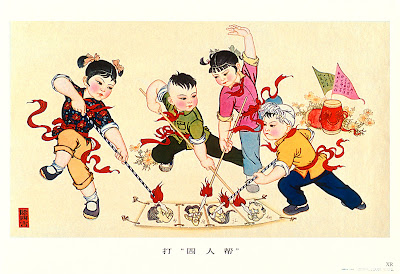 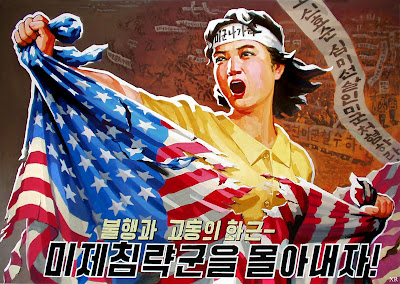 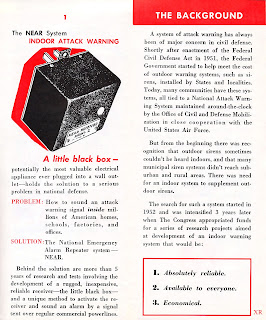 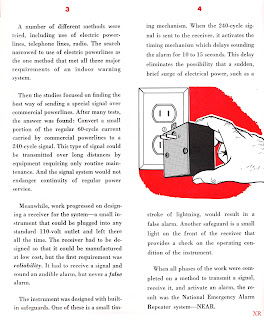 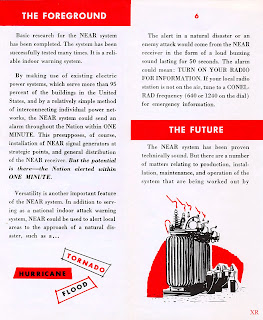 ... by 1961 Intercontinental Ballistic Missiles can strike the US with less than 30 minutes warning. Civil Defense planners are looking for an efficient, no-brainer, way to alert the population to take shelter NOW! With the H-Bomb being the weapon of choice, and the resulting fallout levels being multiplied many times from olf fashioned, has-been A-Bombs: the what to do and where to go of population protection is becoming critical.