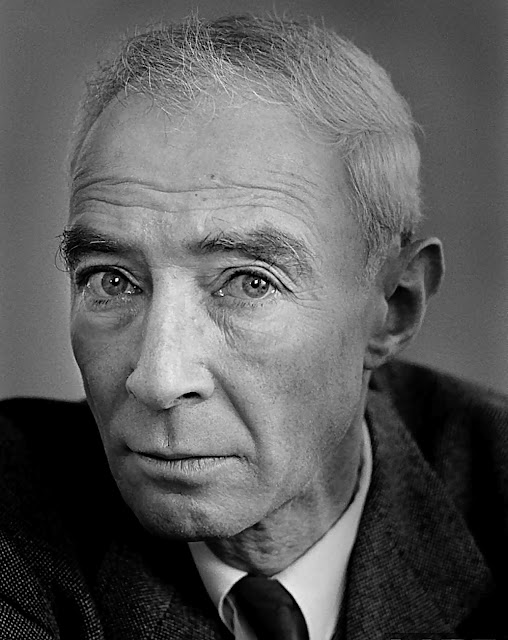 ... the history of the twentieth century gives us such great dramatic characters and such amazing faces to go with them. Robert Oppenheimer; director and mastermind behind the WWII 'Manhattan Project'. The builder of the first Atomic Bomb. Perhaps- only he- processed both the genius and charisma to pull together and relentlessly drive the world's greatest scientific minds toward an ultimate weapon to end the war.

But history and popular culture would reveal him as a complex and classic character worthy of a Greek tragedy. For even as he witnessed the test of the first bomb in New Mexico he was feeling growing moral misgivings about the technological wonder he had created. Hiroshima and Nagasaki weighed heavily on his conscience and the stockpiling of bigger and better weapons drew his disapproval and protest. Eventually his peacenik leanings caused him to be a 'security risk' and locked him out of the very nuclear laboratories he had created.

But how could it have been otherwise? How could this man who championed the building of 'The Bomb' be anything but a haunted character. How could he, and we, not be troubled by the unleashing of powers of ominous and God-like proportion.

What if he had been mean, and dark, and smoked big cigars as he cackled over the triumph of his will? What fable and fairytale would that have taught humanity?

Would humanity be alive today if the father of the atomic bomb did not have such haunted eyes? 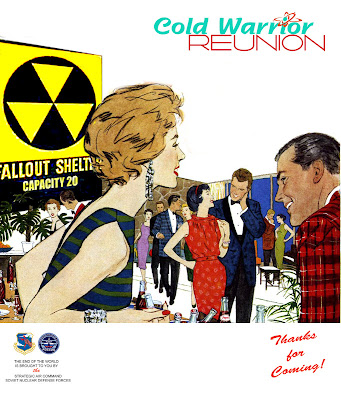 ... I have confessed that the real reason I hold several large parties each year is as an excuse to make up invitations! This was for a get-together of grade school chums from the late 50's early 60's. In other words, the kids I would have been hiding in the fallout shelter with and fighting off the Atomic Zombies if they had dropped the 'big one'. 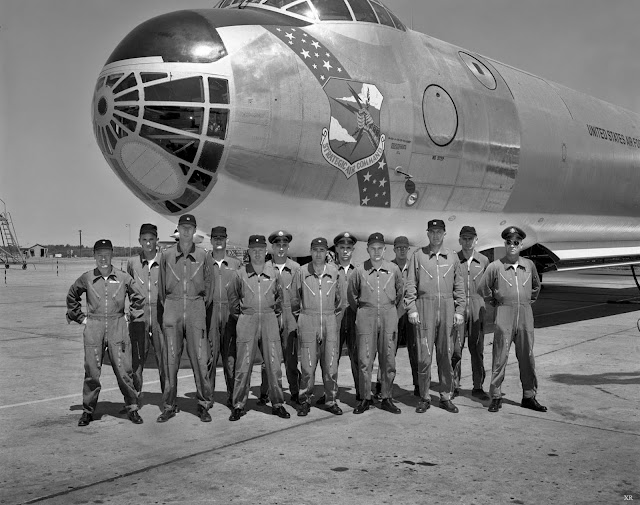 ... takes a lot of guys to run a B-36 'Peacemaker'! The Aircraft Commander on the extreme right looks like he eats Plutonium for breakfast- no sugar either! 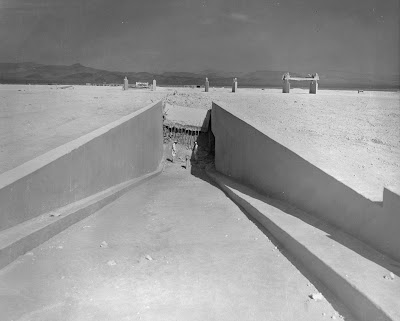 ... let's take a moment to revisit the Doomsday parking problem! 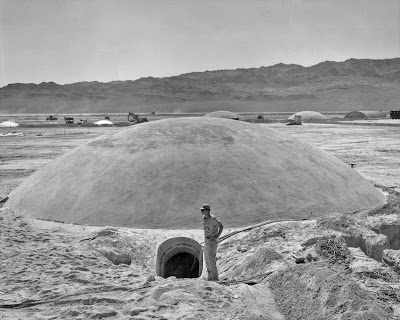 ... partially exposed 'igloo' style; reinforced concrete. Too much exposed surface to over-pressure from  20 kiloton blast at 600 yards. 'Smoosh- Factor' minus 10. 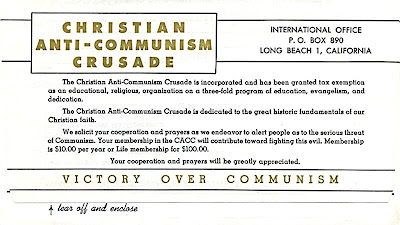 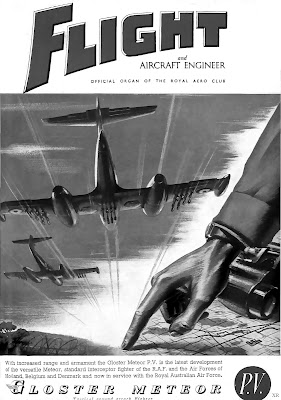 ... the Gloster 'Meteor' was the brainchild of British scientists and was the and only Allied jet to see service before the end of WWII. It continued to be a mainstay and workhorse of the RAF and NATO for what seemed... forever! 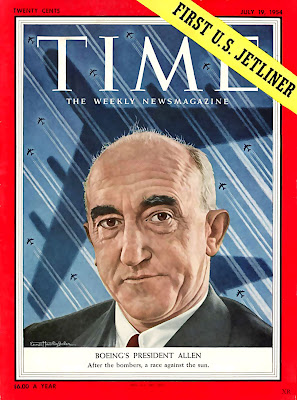 ... never stopped to think about it until recently: but we had jet bombers way before we had jet airliners! Two reasons. One- because the Military and the Cold War was a higher priority and there was a lot of funding. Two- from the trial and error of military projects came more advanced, safer and economical designs for commercial civilian use. Send up the Air Force flyboys first before you start start zooming Grandmas through the Stratosphere at 650 mph! 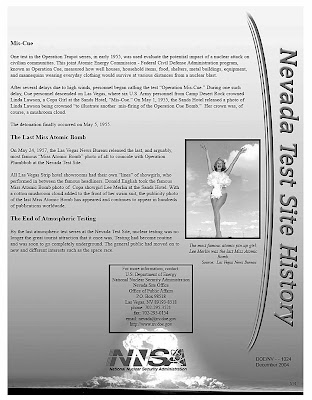 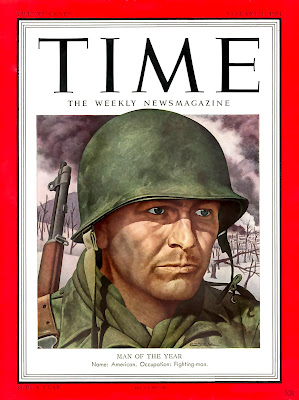 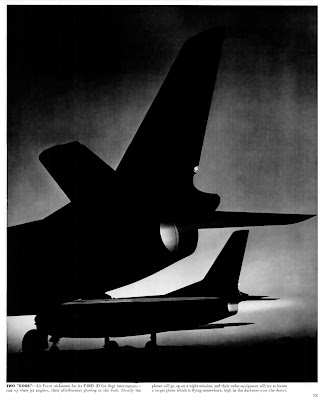 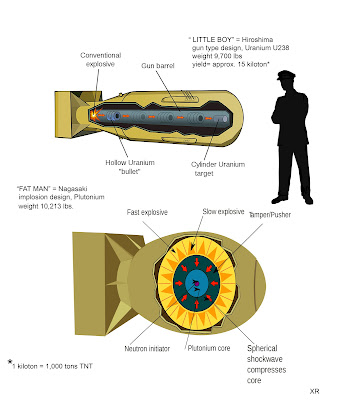 .... this is what the 10 foot tall 'payload' of a Titan II looks like after it has plowed back through the lower oceans of atmosphere, at 15,000 mph, on it's course from outer-space to target.

In the late 1950's, bigger and more reliable rockets brought both manned space flight and nuclear tipped Intercontinental Ballistic Missiles (ICBMs) toward imminent reality. Still unresolved were materials and shapes that could survive the furnace heat of 're-entry' back to Earth.

The problem was that no matter how streamlined the shape, or how super-duper the construction of the missile 'nose-cone', it came back to Earth a charred mess. To complicate the situation, on good days the rocket would be carrying an astronaut; on bad days a complicated machine of mass-destruction. Both still had to be in working order at the end of their flight. Threatening to lob large chunks of burned up rocket at your enemies was not an effective nuclear-deterrent!

The solution was two-fold and unconventional. Instead of a pointy tip to produce minimum atmospheric drag and friction heating, a blunt shape was adopted. The blunt shape produced a large 'shock-wave' in front of the nose-cone, pushing much of the air and heat out and ahead of the re-entry vehicle.

The second part of the solution was to allow the nosecone to burn! The blunted shape was covered in layers of heat resistant material [phenolic epoxy resin coated fiberglass]. This gluey glop, slowly, stubbornly charred and sloughed off layer by layer. It carried away the unbearable heat and lasted just long enough to allow the hydrogen bomb, or astronaut, to remain 'functional'.

( It should be noted that in the case of astronauts, the 'capsule' design turned the re-entry configuration 180 degrees around, with the most blunt rear end 'heat-shield' toward the descent and friction. The layering of burn away material was also much thicker since a human being was more fragile than a vacuum-tube powered Hydrogen Bomb.)

- The 9 megaton W-53 Hydrogen bomb was one of the USA's 'super-economy size' weapons. The early ICBMs were not very accurate and so military thinking was to wipe-out everything even close to the target. 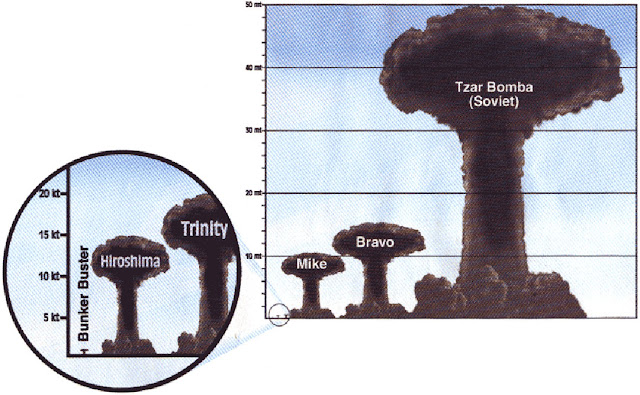 ... this little diagram explains a lot about the history of the Cold War. The 'fission' bombs that completely destroyed the cities of Hiroshima and Nagasaki are shown in the extreme left and the enlargement.

Just seven years passed between the invention of the Atomic Bomb and the testing of the first H-Bomb or 'Super'.  Yet Hydrogen Bombs are thousands of times more powerful. The Atomic Bombs which were so feared- which had forced an intractable enemy to it's knees- which had started a new 'Cold War' between two former allies- which had changed history and the course of world events forever- that ultimate weapon which hung over every citizen on both sides was suddenly small and obsolete.