... shown here in a 'conventional' ground-support role, the F-100 "Hun" was also nuclear capable. Hell - in the fifties and 60's if it had wings they would strap a small H-bomb on it! 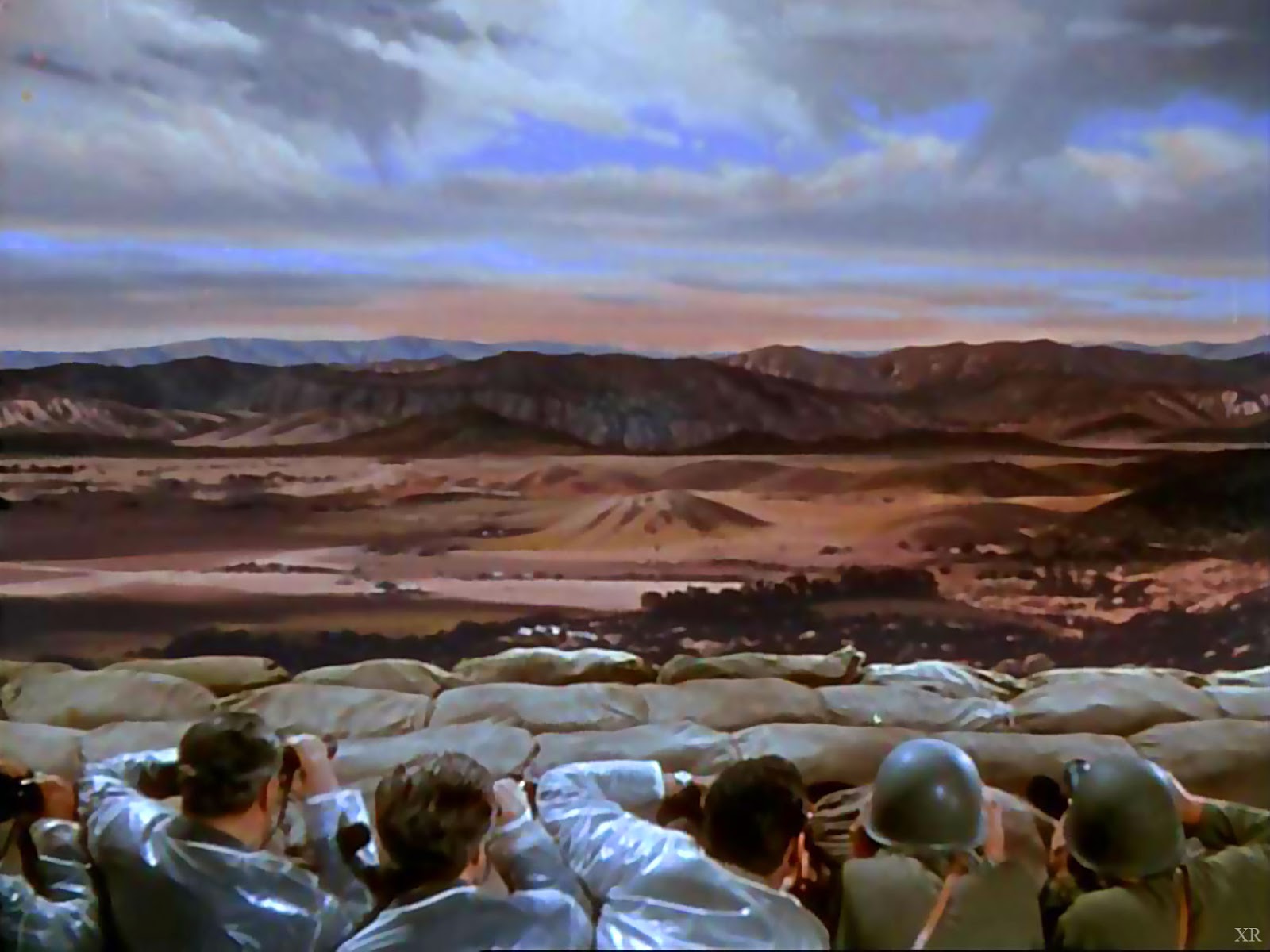 ... frame capture from George Pal's 1953 production of "The War of the Worlds". Our heroes wait tensely for the arrival overhead of non-other than the mighty YB-49 Flying Wing to nuke those pesky Aliens! 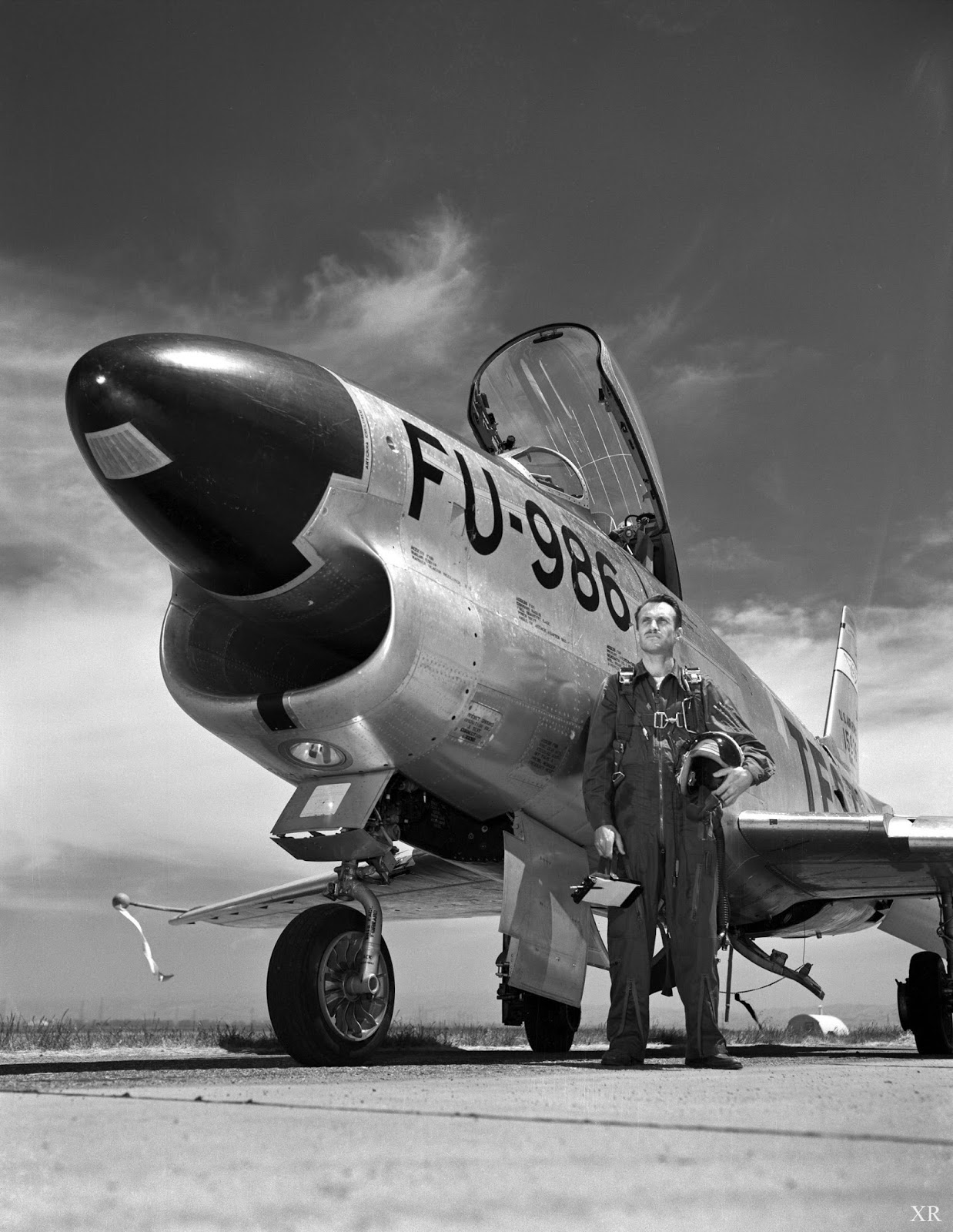 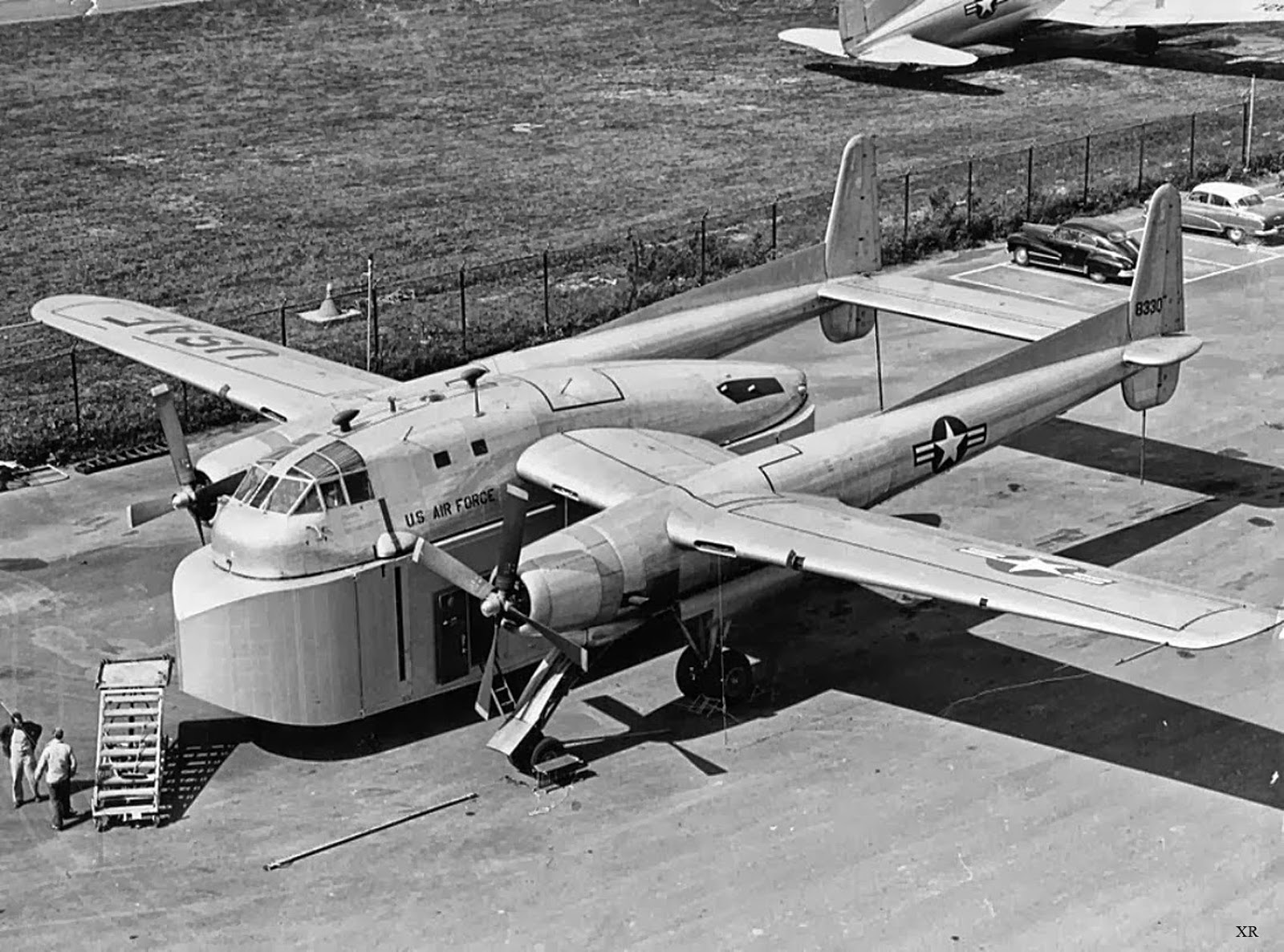 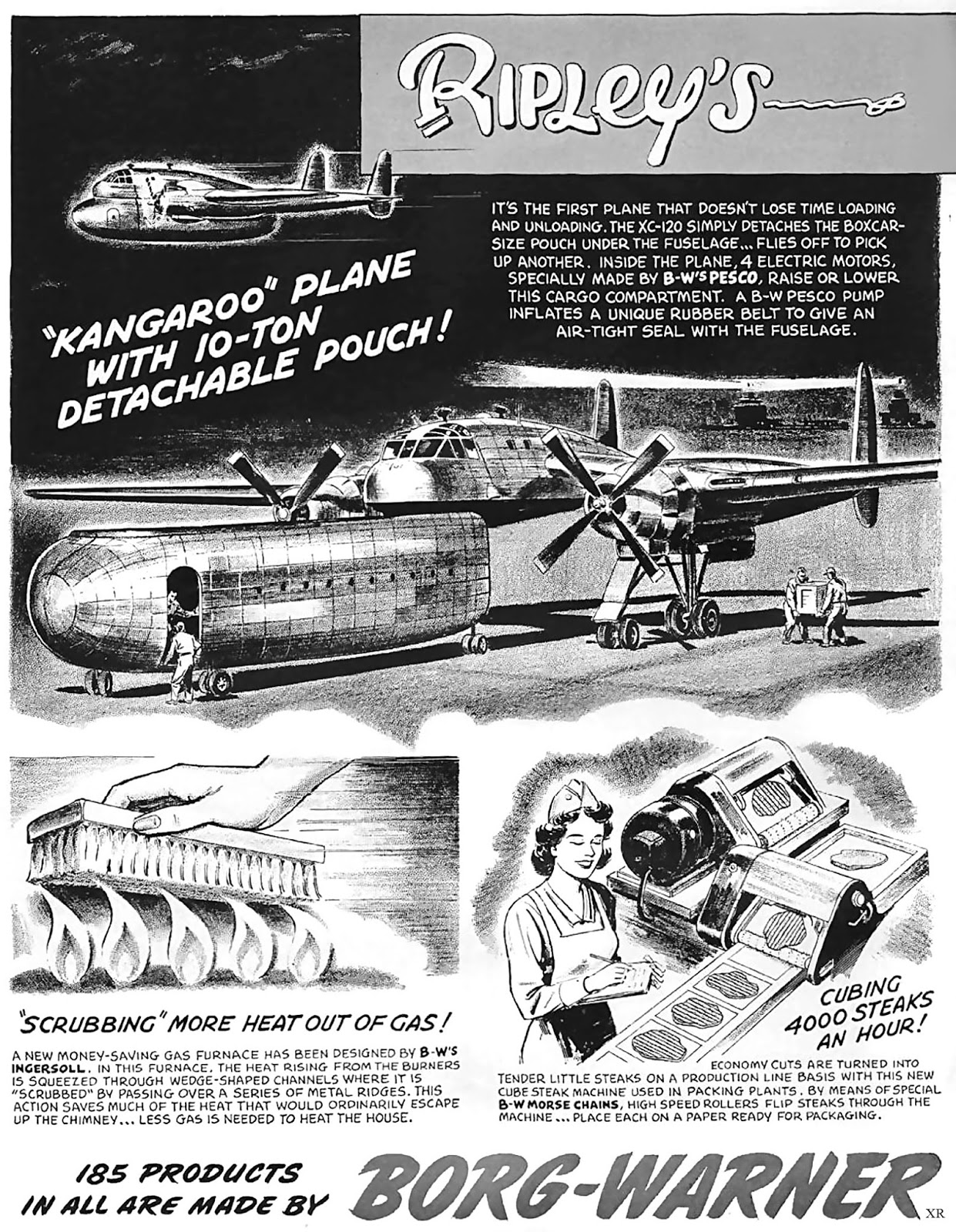 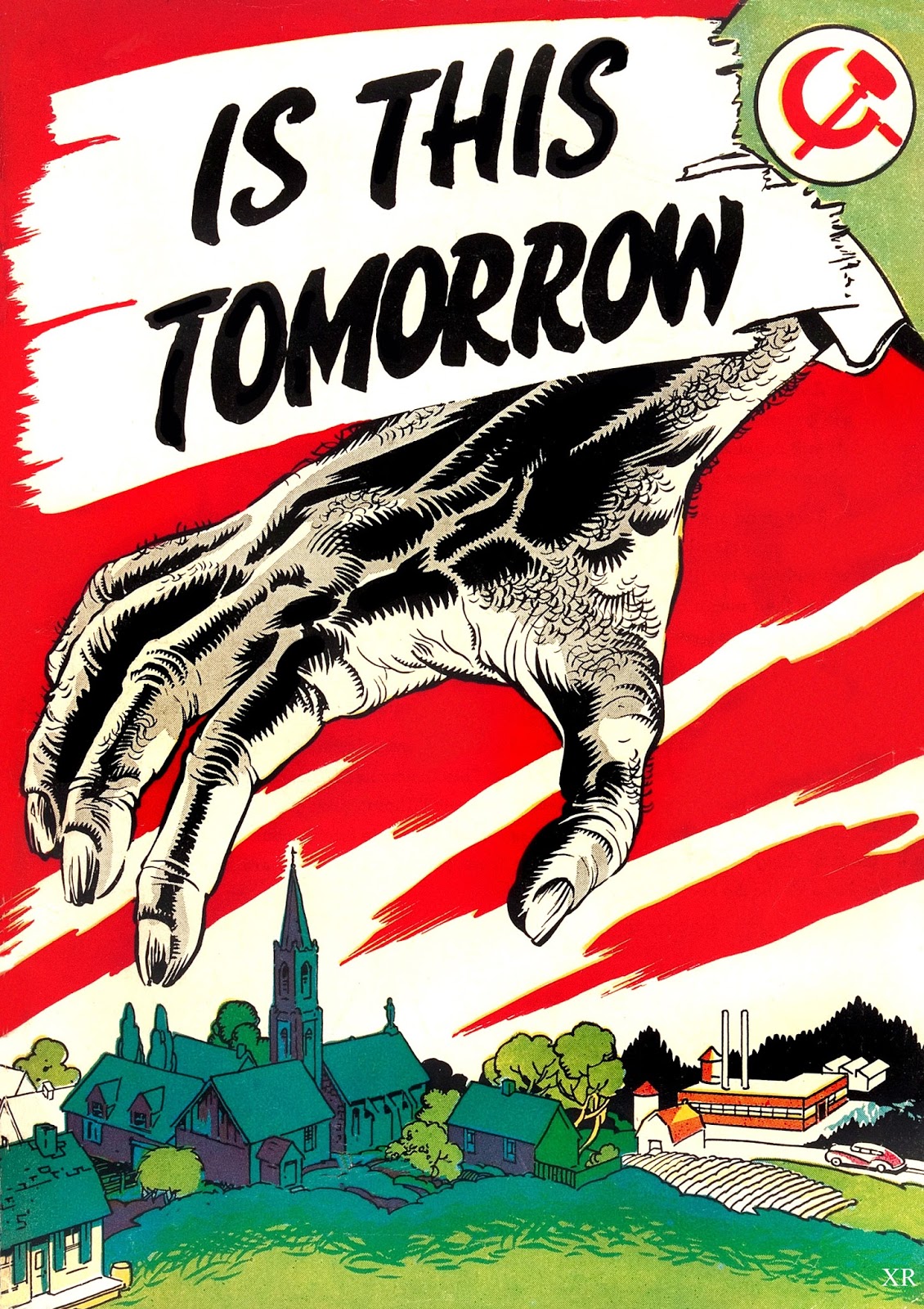 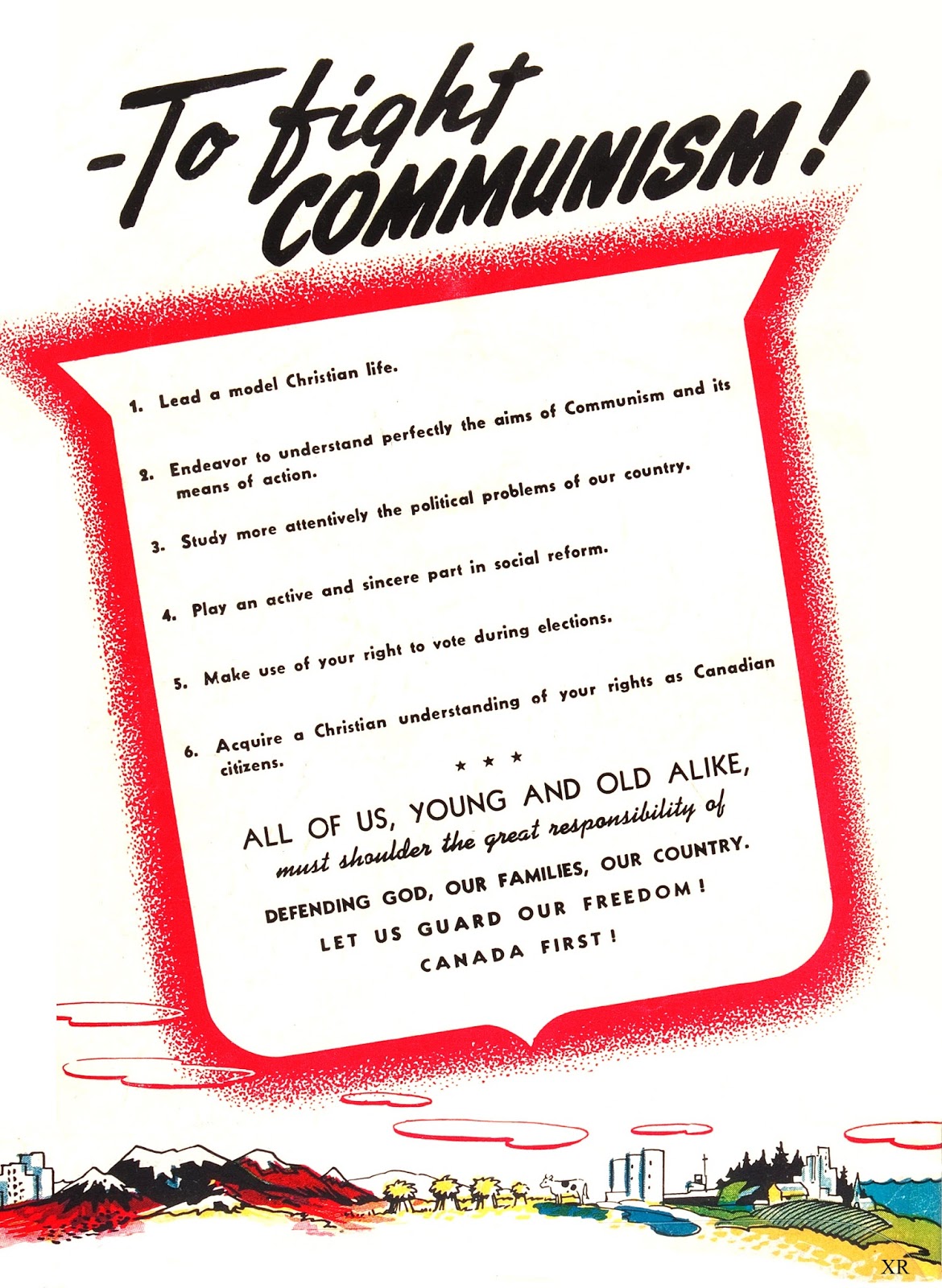 ... who knew that our neighbors to the North also feared gigantic hairy hands from Russia plucking up their blue-green churches! 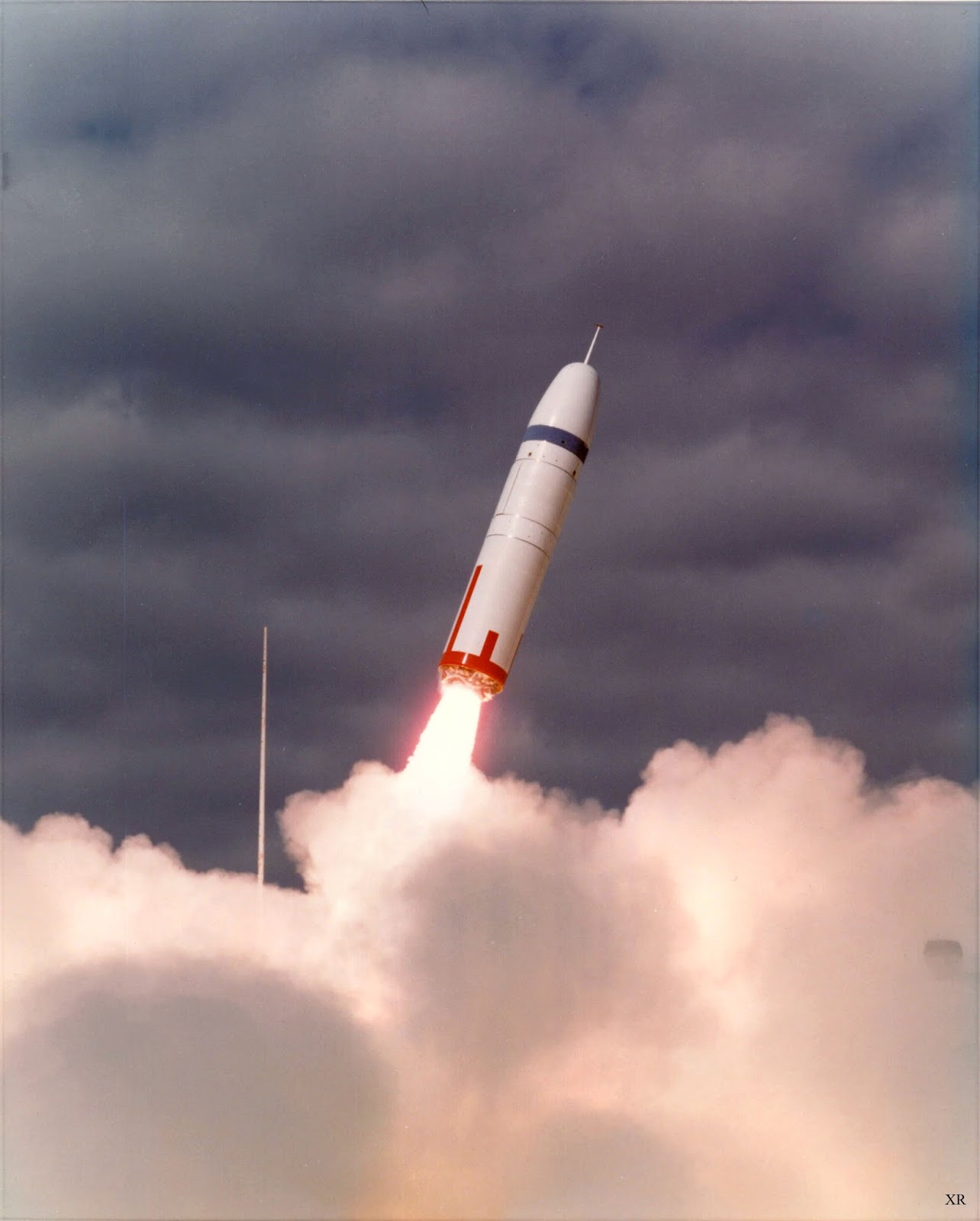 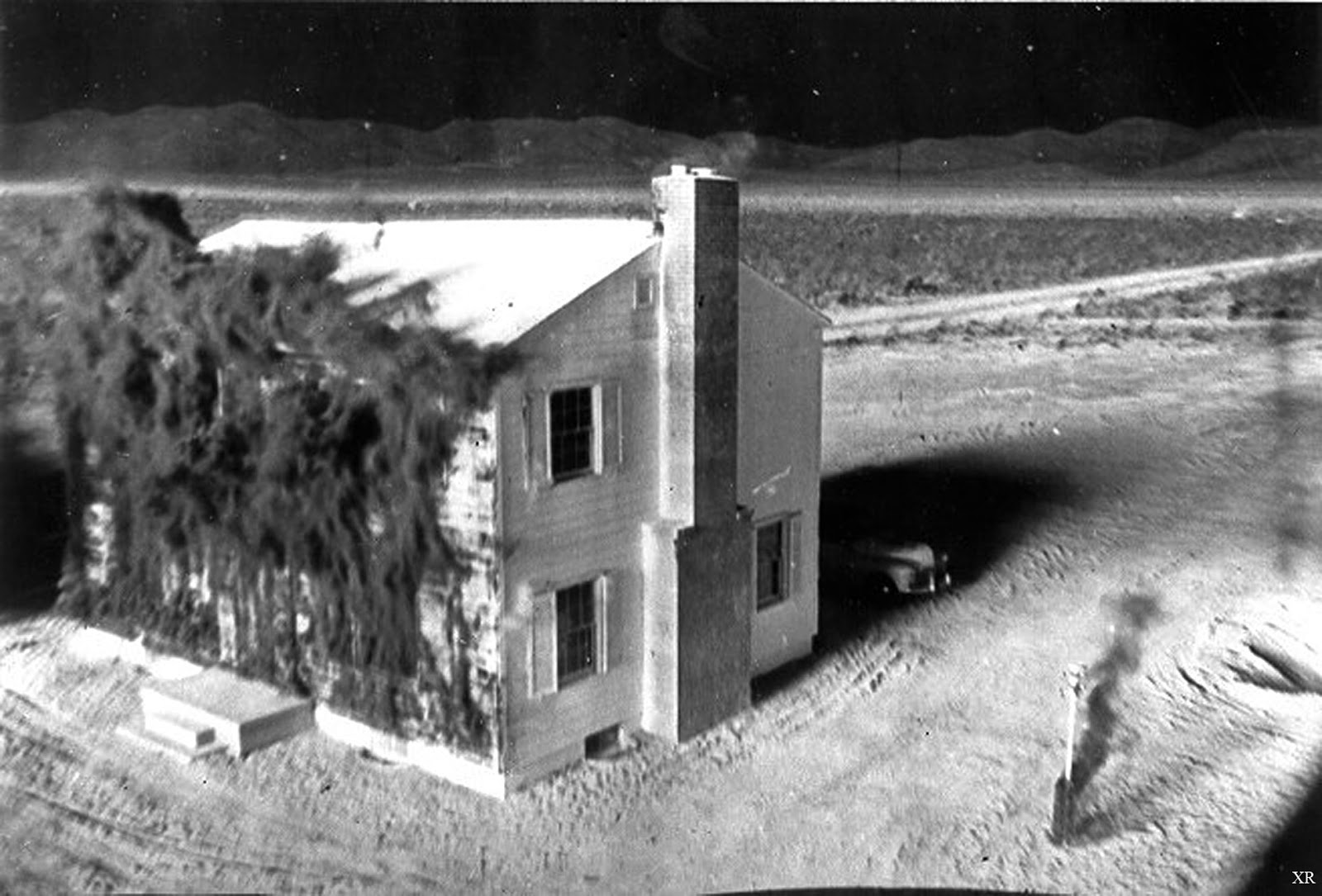 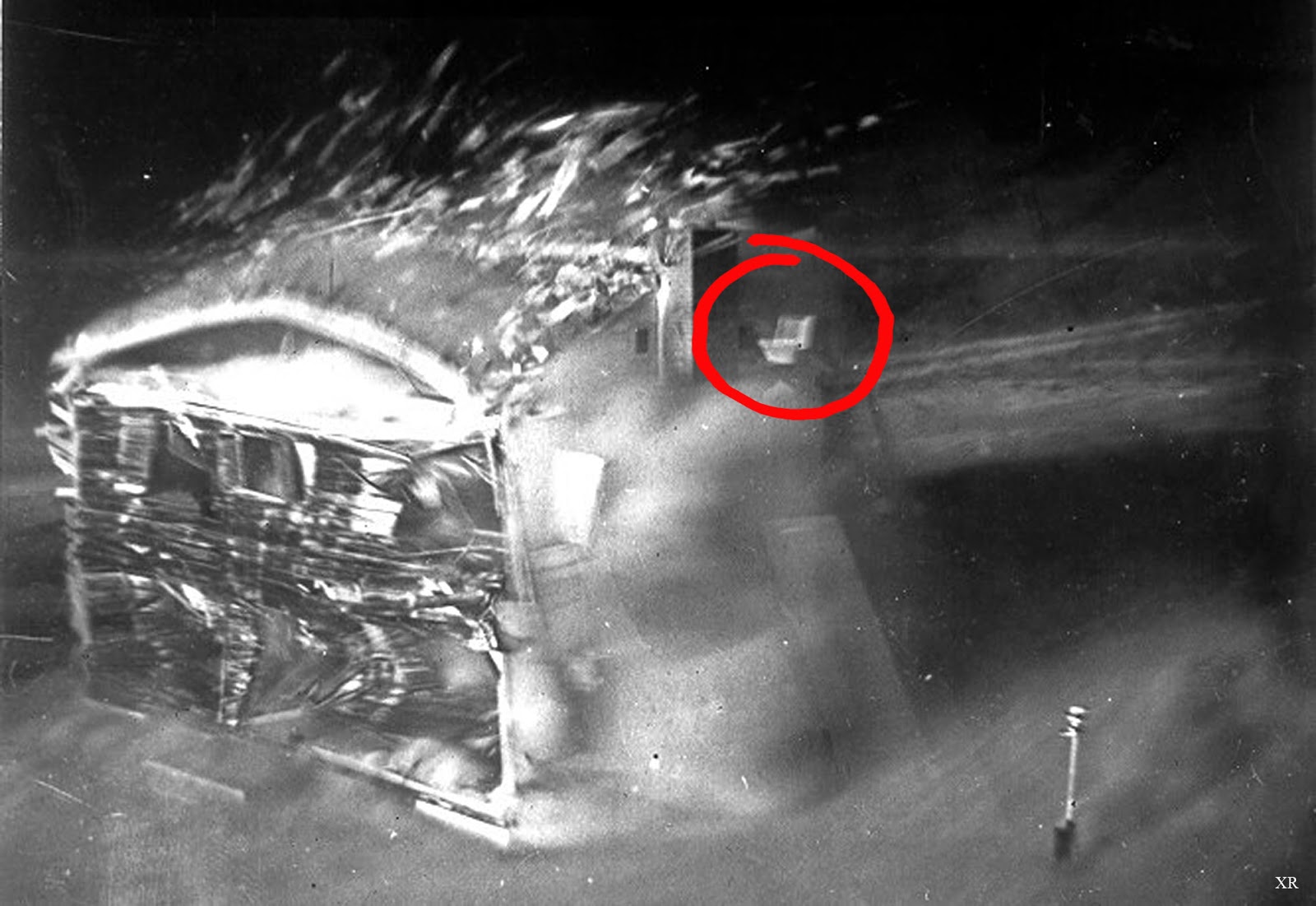 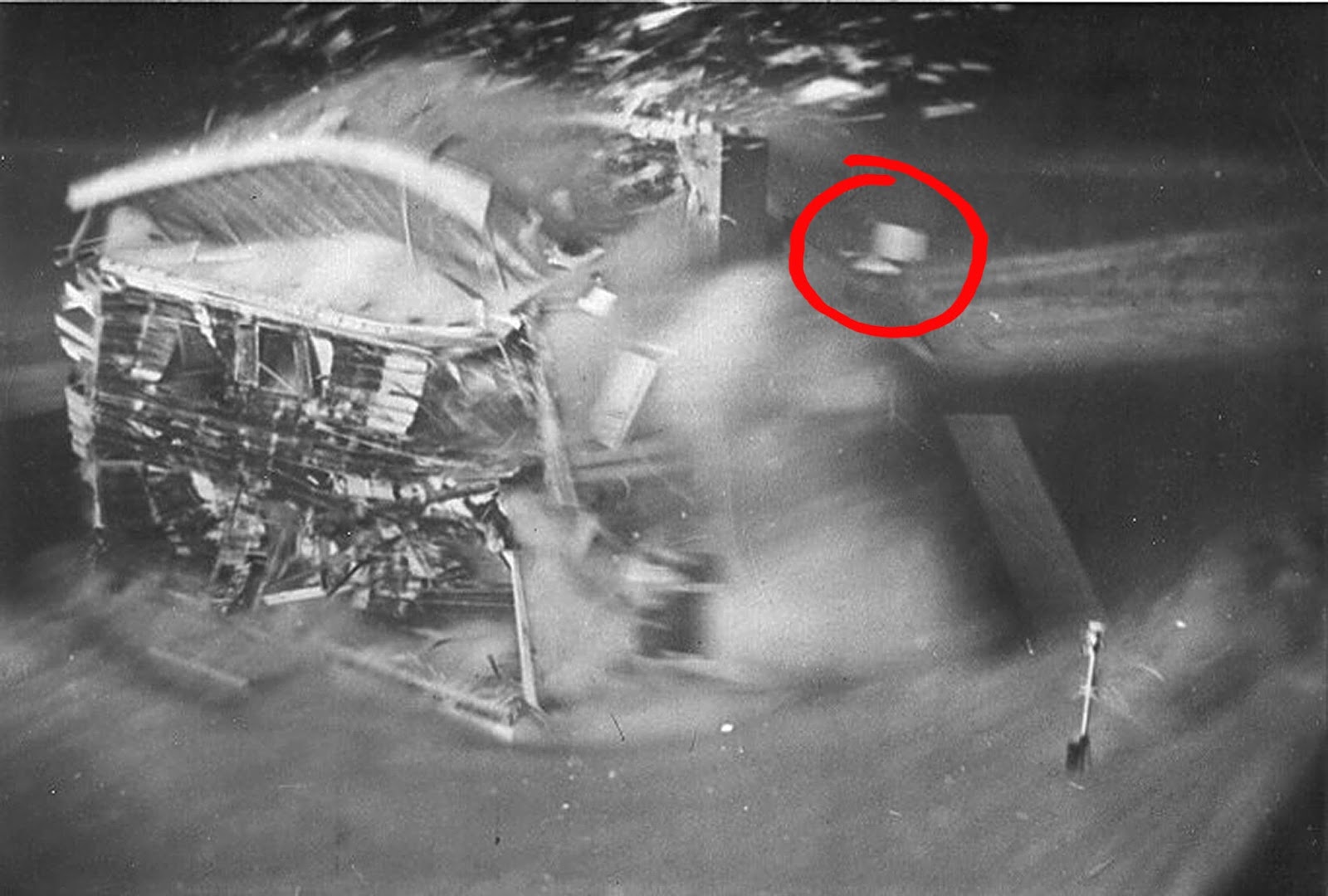 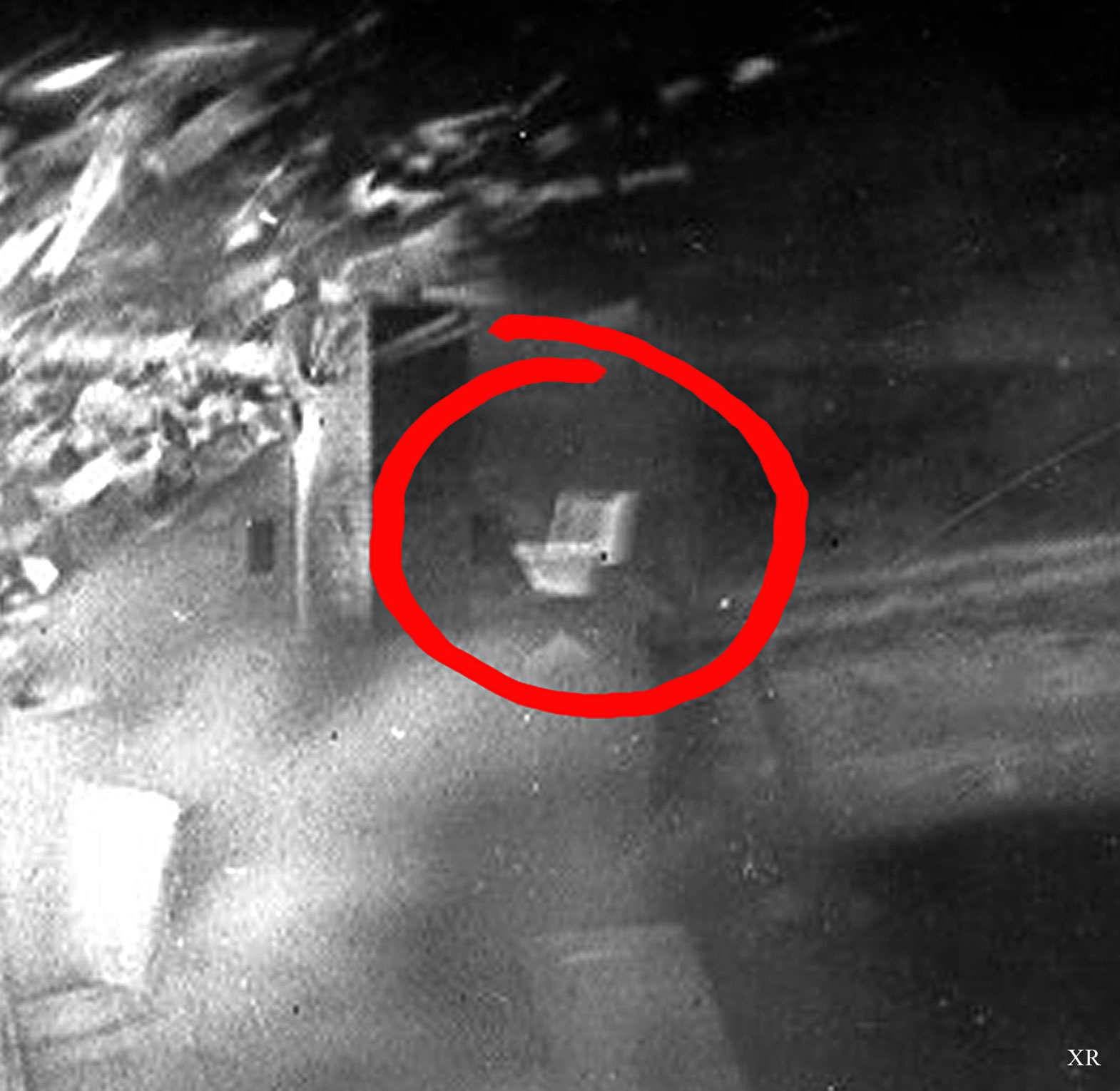 ... this is the hapless two story average American home mentioned here. It is a series of motion picture frames from "Operation: Upshot Knothole" that we have seen over and over. Only recently have I spotted what appears to be an American Standard toilet being ejected out the back of the dwelling (?)

In the second frame and the enlargement it certainly seems shaped like a toilet.(enlarge each image by: right click/open in new tab) The test house had furniture, mannequins a kitchen. I suppose it would make sense to have a bathroom. Or at least a basic W/C so the doomed store-dummy family would have a place to re-leave themselves as the seconds ticked down to zero.

The initial position and trajectory seem a bit high, unless it was in the attic. However the house is simultaneously collapsing, being pushed backwards and the roof is peeling back. If the toilet was connected to a sturdy waste stack then it is possible that it is simply 'holding it's own' while the house is being blown apart around it.

Given the mystery of "the stray shoe" (see link above) it is also possible that the Corporal in charge of installing the toilet simply stashed it in the attic: not knowing that 61 years later his slovenly actions would be discovered!
4 comments:

... When Britain Ruled the Skies! [video]

... very informative presentation about the British Aerospace Industry after WWII and how it lost it's lead to the United States. 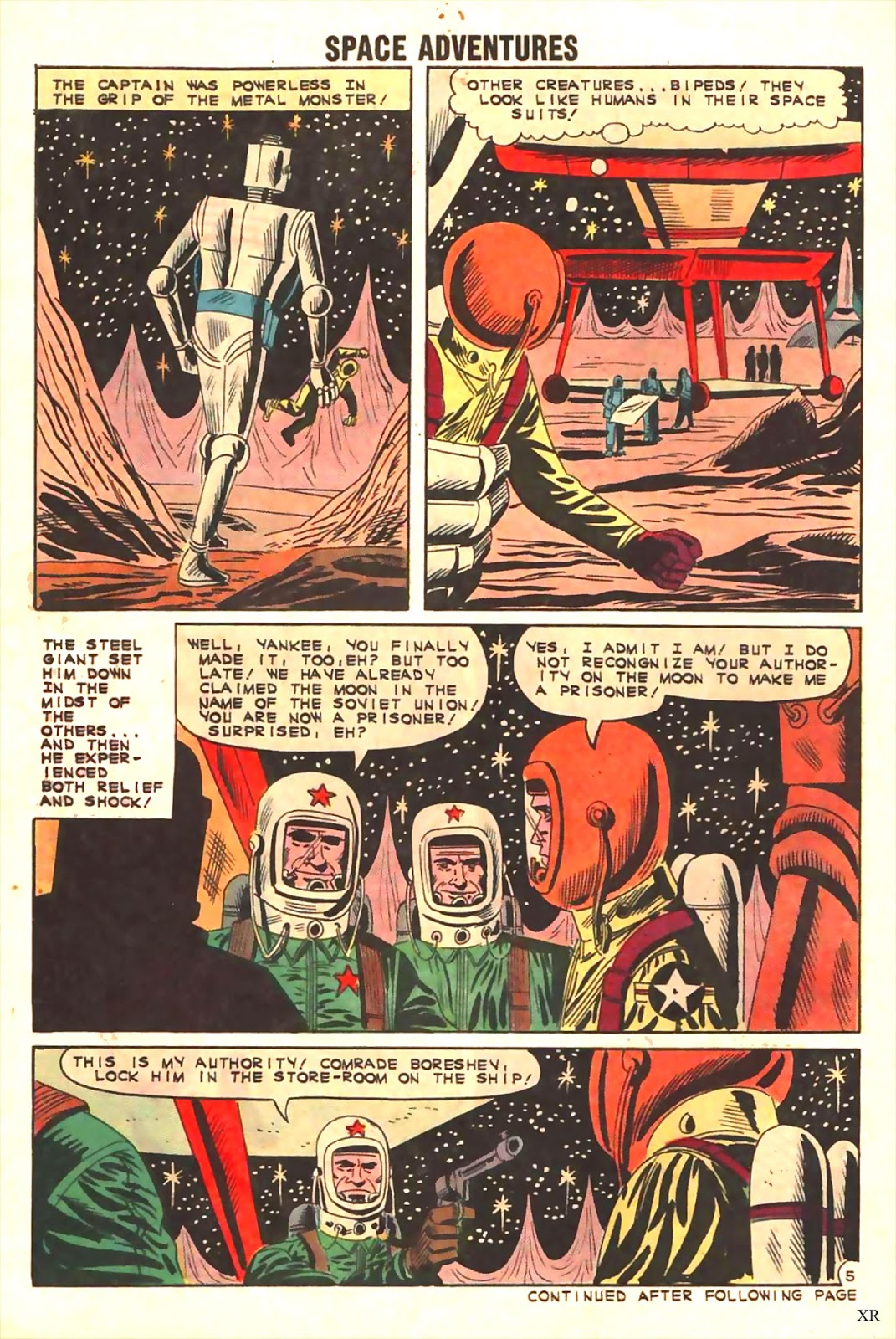 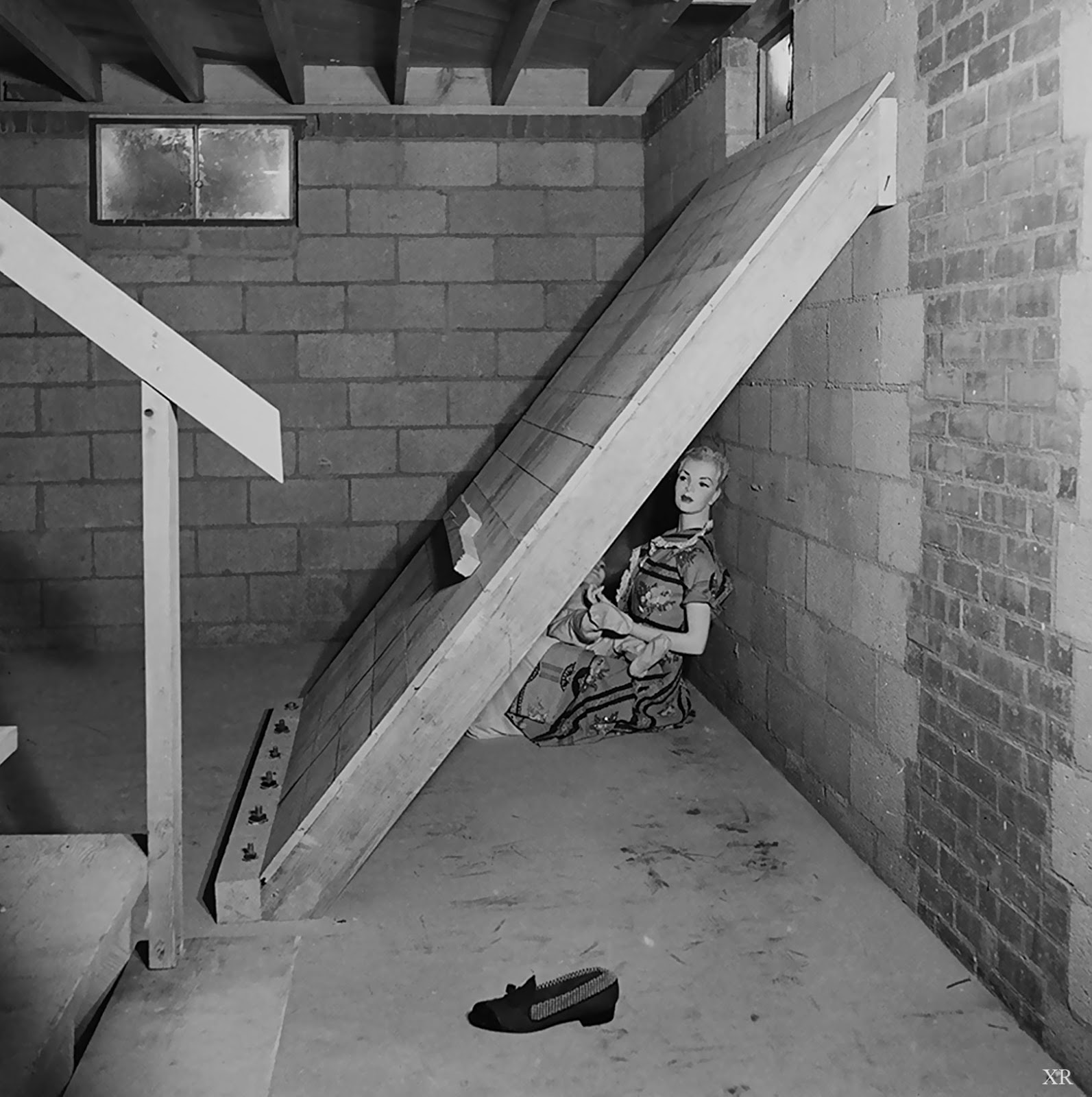 ...  "Operation: Doorstep" a part of "Upshot Knothole" was the construction of several typical American suburban homes at the Nevada test site in order to study blast effects and the effectiveness of various types of shelters. Seen here is a lean to construction in the basement. If everything was pre-cut, you had the right tools and had drunk a couple of cups of black coffee; you could wham it together in, say, 30 minutes?

... the deal is that it worked! At 3,500 feet from ground-zero of shot "Annie" a 16 kiloton  (Hiroshima size A-bomb) the mannequins inside did just fine. However the house did collapse partially into the basement so getting out to find flee or find shelter from the coming fallout would be difficult.

... the shoe? Ironic historical humor? We'll have to check with the Army Corps of Engineers.

... see the KAFLOOEY footage below!

... at about 30 sec. you get to see (for the zillionth time) the kaflooey of the two story house. In still frames; I am sure that a we see an 'American Standard' toilet shoot out the the rear of the second story [more on that later].

... the house is at 3,500 feet from ground zero- which is around the same distance as Indiana Jones finds himself at minus 10 seconds ... 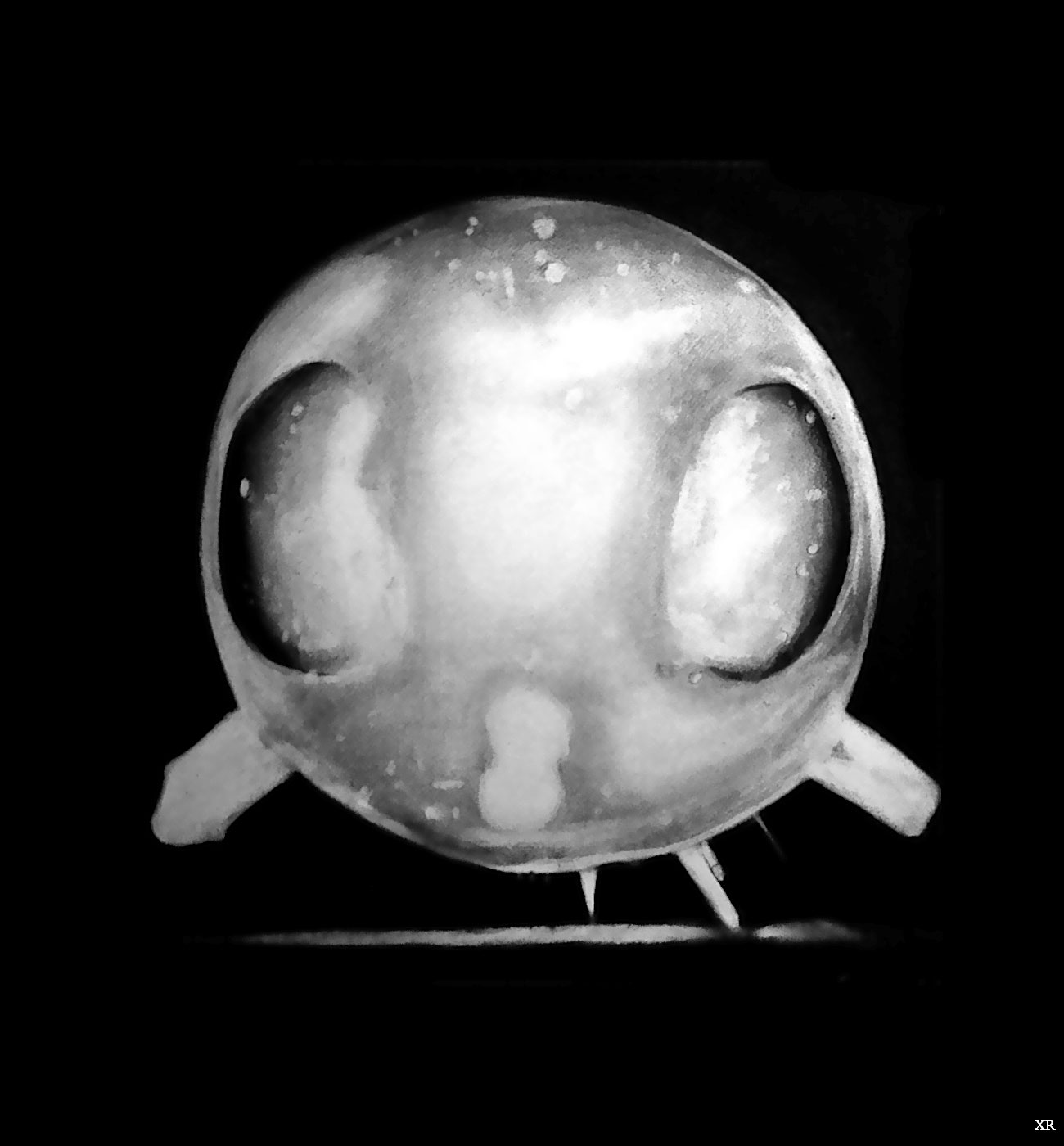