... "Warning Red" a 1954 push for Civil Defense preparedness. Guy stops off to buy some ice cream and gets Nuked, jeeze!

... thanks to the guys at 'Conelrad Adjacent'
No comments: 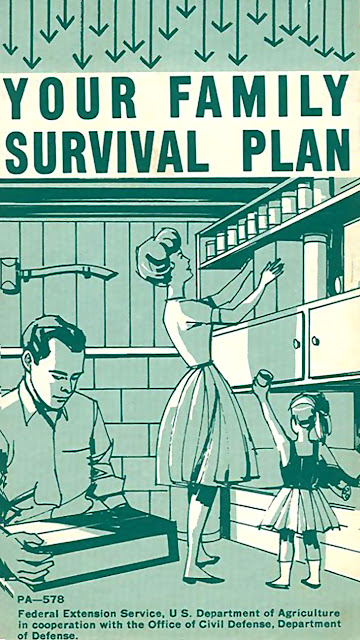 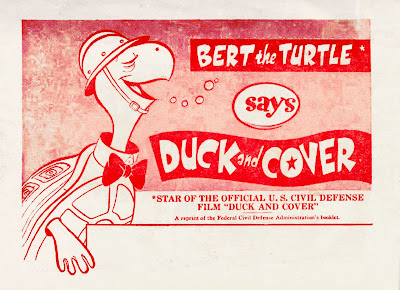 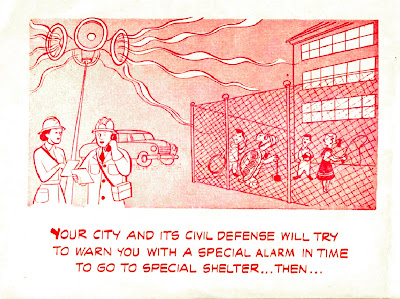 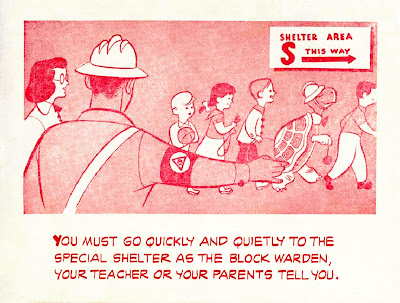 ... as has been discussed at some length in previous posts; the concept of 'Duck And Cover' was not as naive as some of us smugly assume.

The 'Bert the Turtle' training film was produced and distributed to grade schools in 1951-52. At this early stage of the Cold War, arsenals were stocked with 'A-Bombs'. These were the type of Uranium based atomic fission weapons used to end World War II. The much more powerful Thermonuclear, 'H-Bombs', had not yet been developed and deployed. Factual analysis of the atomic bombings of Hiroshima and Nagasaki showed that many lives would have been saved if the inhabitants had been forewarned to do as 'Bert' told his elementary school audiences. Unless you are very near to ground-zero (at the epicenter of the blast) there is several seconds between the flash of light and the arrival of the blast wave. Dropping behind the nearest cover can indeed protect a person from much of the thermal effect and flying glass and debris. An old fashioned school desk made of Oak and Iron can, in fact, be good protection.

In the early 1950's the vast radar network warning in advance of enemy aircraft had not been perfected. There was great fear of a Pearl Harbor style sneak attack. 'Attack without warning' was a distinct possibility. Fission bombs, or 'A-Bombs', produced far less radioactive fallout than the later developed H-Bombs. If you survived the initial blast than you had a real chance of escaping away from the contaminated area and avoiding radiation poisoning.

(Fantasies that in a Nuclear War all victims conveniently are 'vaporized' or that given a possibility of survival you would 'rather die' are the truly naive attitudes.) Besides the film was made for children. Even the most cynical of us can hardly say that trying to save children from being burned and maimed is 'pointless pacifying misinformation'. 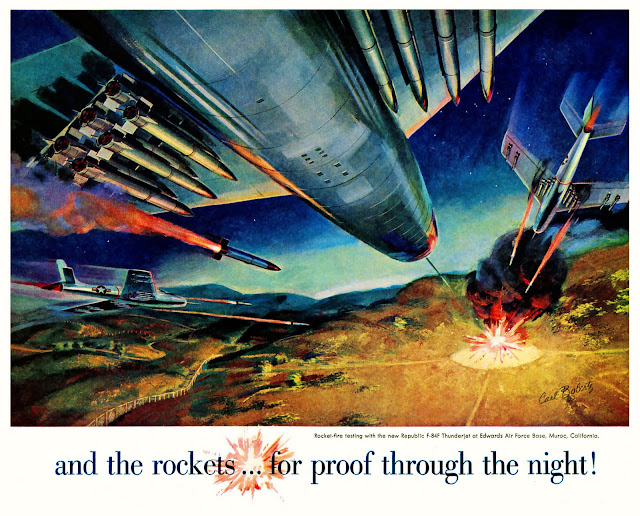 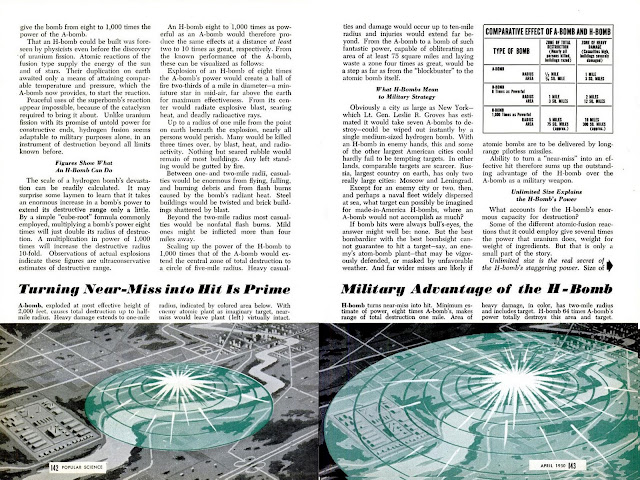 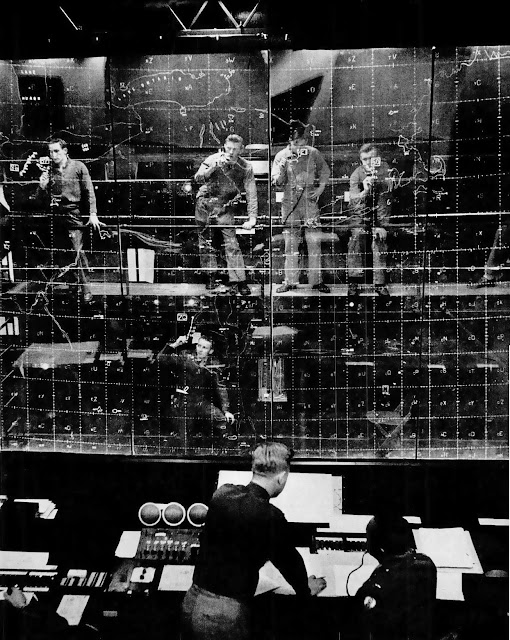 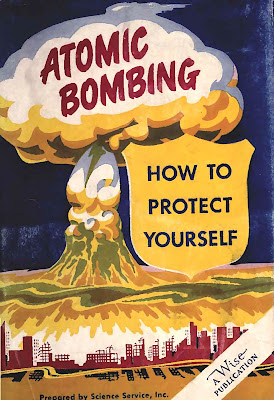 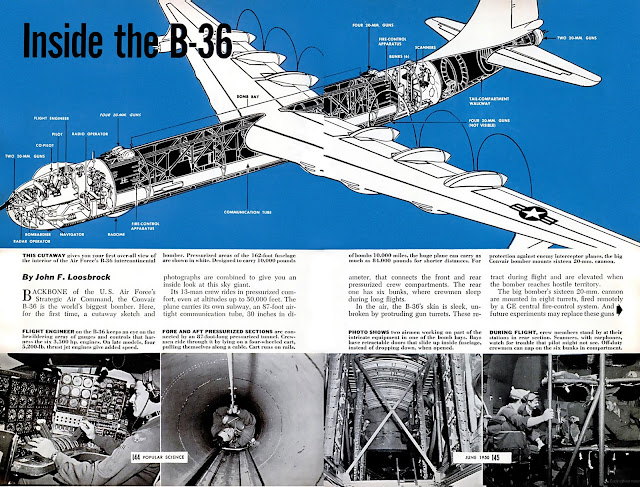 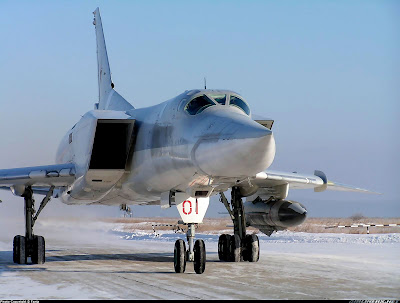 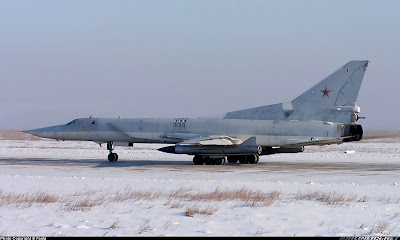 ... here's one that has made the US and NATO nervous for decades. This Russian, swing-wing strategic bomber is capable of supersonic flight. Arguments and controversy
about it's true range have made it an important chess-piece in arms reduction talks.
Present day 'Backfire's have had their re-fueling probes removed, keeping them in the stable of Russia's 'intermediate range' bombers. A very formidable aircraft. 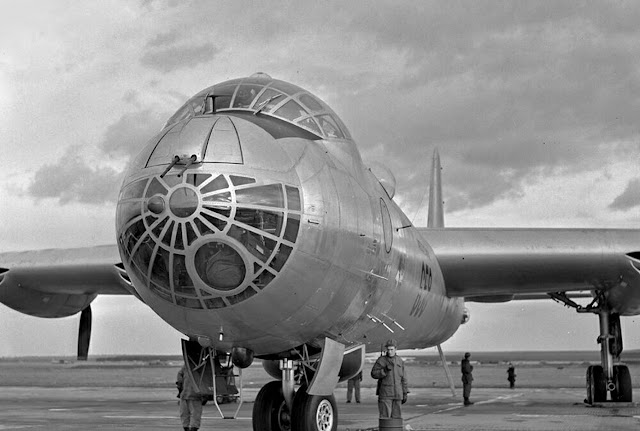 ... in the early 1950's Gen. Curtis LeMay was working hard to whip the USAF Strategic Air Command into a credible 'deterrent force'. Groups of SAC's bombers were regularly moved to 'forward bases' in friendly countries. In time of crisis these huge lumbering bombers would have an easier and quicker time of reaching their Soviet targets from these closer locations.

Although the first 'intercontinental' bomber in the US inventory, the B-36 was vulnerable to defending Soviet jets. It's vast size and complexity was a long reach for the technology of that day and it was prone to frequent mechanical failures.  De-classified reports now show that although it's proponents claimed a 10,000 mile range; when fully loaded with fuel and nuclear weapons, attack missions to and from the USA would leave the big bomber's ten engines running on empty.( If they made it back to home at all.) Never the less, the Convair B-36 'Peacemaker' was a successful deterrent, showing a determination that America could strike the USSR even if Europe and the Far East were over-run.

Today, we take for granted taking a Jumbo-Jet from New York to Hong Kong non-stop. Sixty one years ago, before aerial refueling, flying to Russia and back, on one fill-up, was a considerable technological accomplishment!

All of this crazy and amazing machinery of the Cold War. It certainly is a blessing that we never had to find out if it would have really worked! 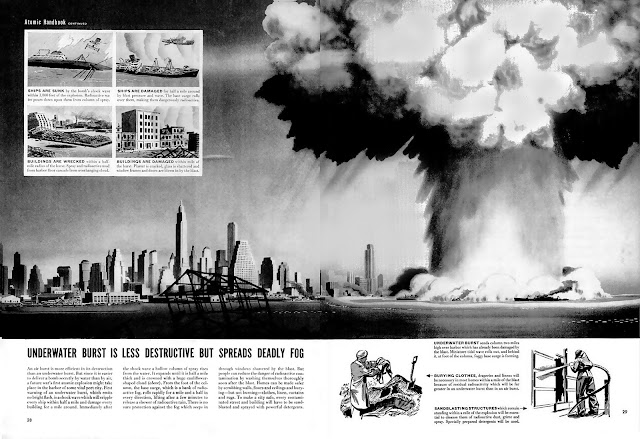 ... fear and imaginations ran highest during the early part of the Cold War. In 1950 Soviet Russia had only a small number of atomic bombs and an air force only capable of 'one-way' trips to the North American continent. But a reliable and coordinated air defense had yet to be developed and memories of Pearl Harbor were fresh. Everyone knew that just a few bombers getting through to their targets would be catastrophic! above from LIFE magazine