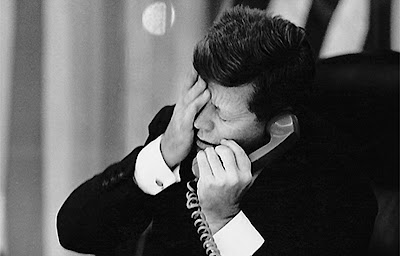 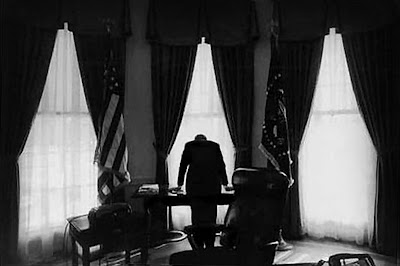 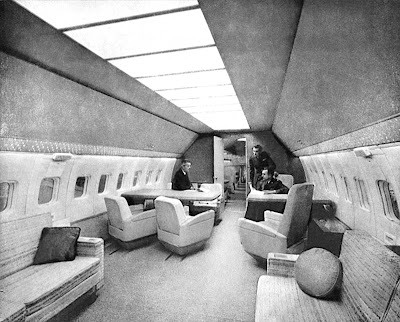 1960- Interior of Boeing 707 -first jet powered Presidential aircraft- call sign- Air Force One. In the Jetage in the Nuclear Age this sleek 707 with it's white, blue and silver livery came to symbolize the potency of the position of the
President of the United States of America. In our imaginations it was here, high in the stratosphere, that the fateful decisions of a "full retaliatory strike" would be made.
No comments: 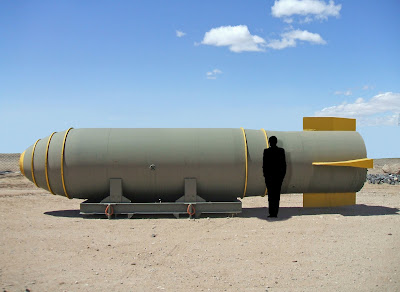 ooooooo very big bomb! First "practical" weaponized hydrogen device in US stockpile. About 305 built. First deployed under "emergency" status ; no parachute to retard the fall and allow the delivery aircraft to escape the blast zone. WHAT! SAC soon fixed the problem of vaporizing it's bomber crews by attaching a 64 ft. parachute to the MK-17. The B-36 was the only aircraft big enough to carry this 21 ton 28 foot long monster. One was accidentally dropped right thru the bomb bay doors. Ooops! Wasn't armed so it didn't go off. Albuquerque lived on. Very big bomb- 15 megatons. That is roughly one thousand times the size of the weapon dropped on Hiroshima. Fallout would kill every unsheltered creature in 5,000 square miles. The test of a version of this device caused a lot of big thinkers on both sides to start thinking of nuclear war as "unwinnable" ----------------------------- http://en.wikipedia.org/wiki/Mark_17_nuclear_bomb
I think Silhouette Man looks a little nervous. 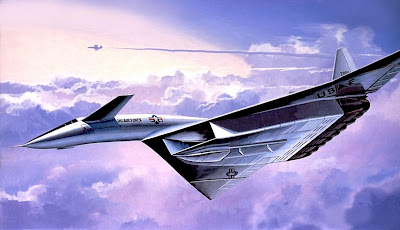 North American XB-70. High altitude penetration bomber. Mach 3 at 70,000 feet!
Same performance as the SR-71 Blackbird but twice the size and three times the weight.
Last attempt to build a bomber that could out-fly Russian air defenses. From then on it was
"how low can you go?".
-----------------------------
Only two prototypes built. One crashed, one lives at the Air Force Museum in Dayton.
Ultimate futuristic technology. Still using what we learned from it today.
Very pretty airplane.
2 comments: 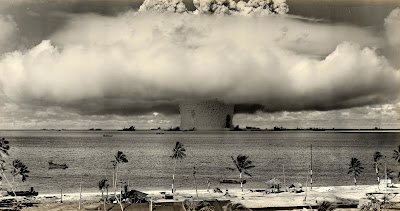 Operation Crossroads [1946] was the first controlled test of atomic weapons after WWII. Bikini Atoll in the South Pacific was the site. This photo is of the 2nd shot "Baker"- 23 kiloton exploded 90 ft. underwater. Amongst other things Crossroads proved that it's not a good idea to spray millions of tons of radioactive water over ships if you want to use them again, and that testing bombs as far away from anyone as possible was very expensive. Nevada was a lot closer and cheaper- and you could party in Vegas!
----------------------------------
As a professional photographer I continue to be amazed at how dirty government negatives are! Dust, hair and fingerprints- these guys would never have made it thru my Photo-1 class!
I gave up trying to retouch this and decided to rant instead. Still, it is quite a beautiful hi-resolution image. Love the black and white indicator stripes on the palm trees.
--------------------------------------------------
Here comes the kid with the projector again!
http://en.wikipedia.org/wiki/Operation_Crossroads
http://www.archive.org/details/Operatio1946
----------------------------------
Note: the Bikini bathing suit was named after the tests.
1 comment: 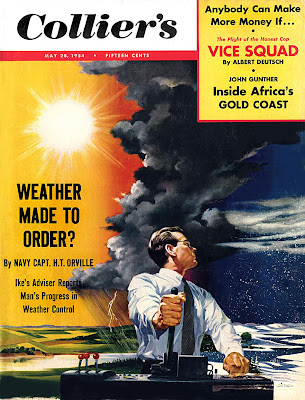 Weather Control- long a fascination for sci-fi fans and conspiracy enthusiasts. Scientists have dreamed and tried for a long, long time- to absolutely no effect. I once asked my father about controlling the weather. As Director of Research at Goodyear in the late 1950's he certainly qualified as a scientist- wore the lab coat to prove it. "Not enough power!" he harrumphed.
Weather involves titanic amounts of energy. It's about the whole surface of the Earth, the oceans and the air being heated by the Sun. Trillions of calories, goo-goo billions of watts. All of the industrial output of the last hundred years has only resulted in- Smog. Maybe affected the cycle of ice-ages and made the color green a pop-fad. Hardly a strategic weapon.
All of the nuclear fire from all the bomb stockpiles detonated all at once wouldn't make the thermometer go up a bit on the global scale. [coincidentally, scientists are now doing a fast back track on the 1980's spectre of "Nuclear Winter"]
We can't make it rain here in Portage County, Ohio. How would we make it rain on the other side of the planet where the bad guys are? Magic. Ultra-high thingy's or low-frequency whatchamacallits or even hordes of Shirley McClain channeling high flying wombats.
Even if we could find enough power to have a direct effect on this thing we call "Weather" what would we get?
Weather.
--------------------------
But, hey- it's a really cool illustration !
2 comments: 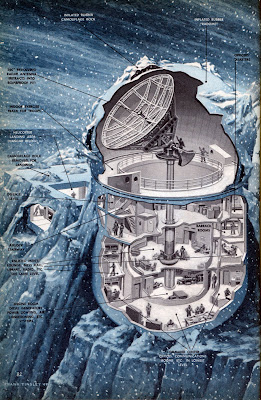 Something about those dark cold spaces of the vast Great White North get those sci-fi juices flowing. The Distant Early Warning [ DEW Line ] system built in northern Canada was the setting for several of the best monster movies of the Cold War. "The Thing" and "The Giant Mantis" amongst them.
Big inflatable ray-dome, artificial movable rocks- love it!
-------------------------
sigh -never built.
-----------------------------
The geek kid from the A.V. Club is rolling in the 16mm projector, it's time for an educational film!
http://www.archive.org/details/dew_line_story_1
2 comments: 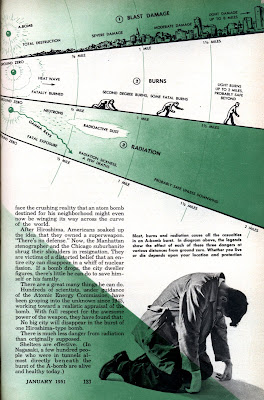 reluctant father of the ICBM 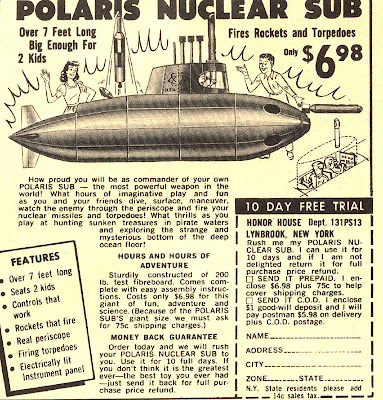 I sent away for this when I was about eight. It was one of the great disillusionments of my life.
It really was just a big painted cardboard box! I never trusted advertising again. Long live Lenin!

I asked my son one time (he's 21 now) what he thought of the threat of atomic war. He said it never occurred to him. How wonderful! 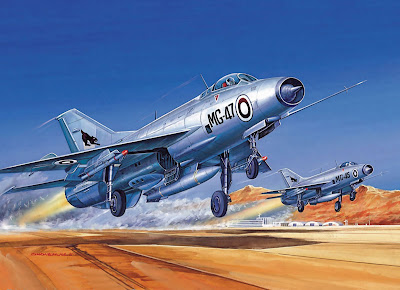 The Dream of Atomic Powered Flight ! 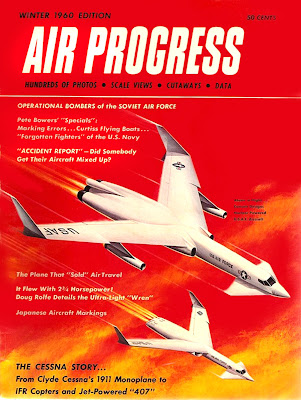 below: Science and Mechanics 1961 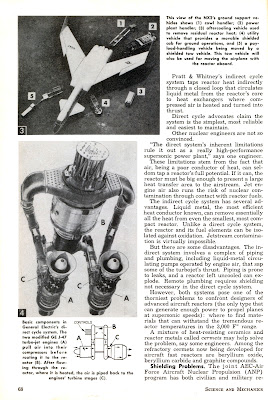 A study of the effects of the "direct" heating method of putting air straight thru the reactor which would produce a radioactive exhaust contrail was codenamed "Project Halitosis".
1 comment: 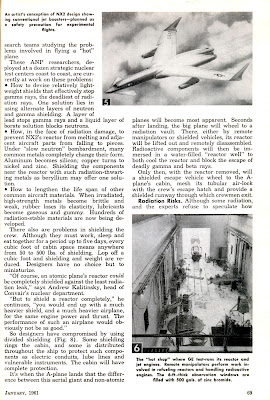 For us today the idea of an Atomic Powered Airplane may seem ludicrous. We should remember the context the dream was born in. In the early part of the Cold War the arms race seemed never ending. To the scientists and generals, whose job it was to defend America, the future was a terrifying landscape of ever escalating threats. From the end of WW2 till the mid 1960s the most reliable delivery system for nuclear weapons remained the Big Bomber.
Atomic power seemed a limitless miracle. People were talking about atomic powered cars and even vacuume cleaners!
An atomic powered airplane was a dream that was enevitable. Be thankful that JFK and his Defense Sec. Robert McNamara finally shut the program down after a decade and billions of dollars produced not one aircraft.
1 comment: 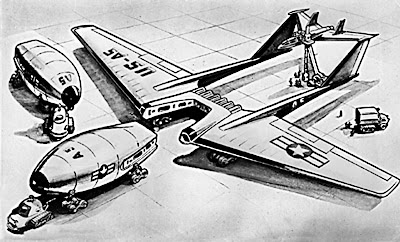 Besides having giant atomic powered, interchangeable suppositories this design had a seperate crew airplane which would mate up with the bomber. Super long duration flights were possible.
Isn't the crew plane kind of downwind of the radioactive exhaust?
1 comment: 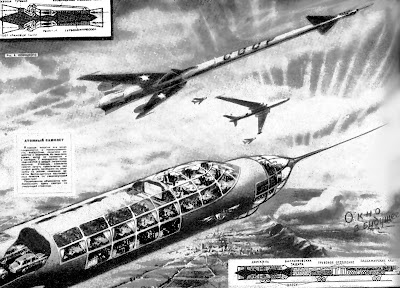 This 1955 Russian design lets you bring your car along and watch "Failsafe" in the onboard theater. Too cool!
1 comment: 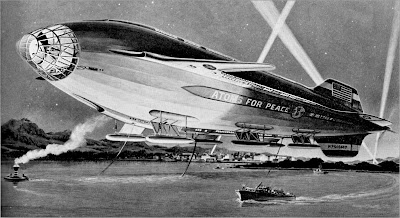 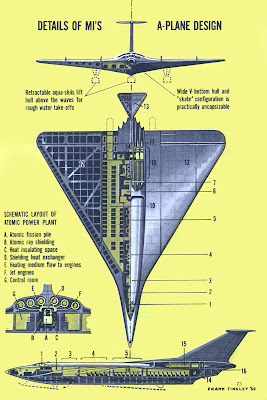 I think the popularity of the kids TV program the "Thunderbirds" doomed the Atomic Plane project. Every design looks like it's going to be flown by marionettes for International Rescue. "Thunderbird's are GO!"
--------------------------------
Why are the passengers sitting backwards, is this an airline owned by a barf bag consortium?

...and now a REAL nuclear powered airplane- sort of... well not really.

NB-36H flew on conventional power only. Reactor was powered up to prove it could be- and to scare everybody. 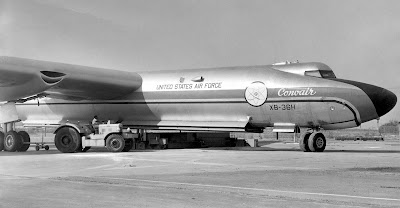 NB-36H being cranked over the "pit" where the reactor is jacked up into the rear bomb bay. 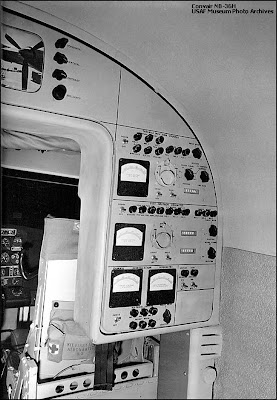 Reactor operator station. Most of the gauges are dosimeters telling the crew how long they will be glowing after they get back on the ground. One gauge says "scintillation"- does that make you better on the dance floor? 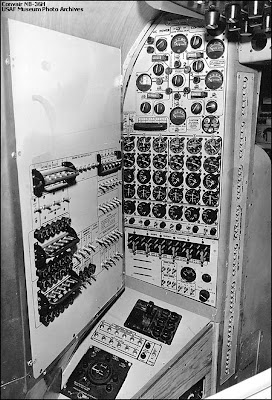 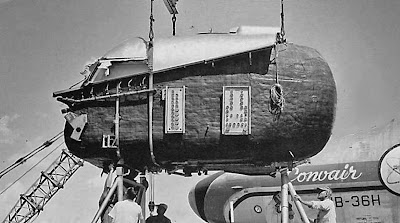 This is the lead capsule for the four man crew which flew the aircraft and ran the reactor tests. The windscreen was 10 inch thick leaded glass. 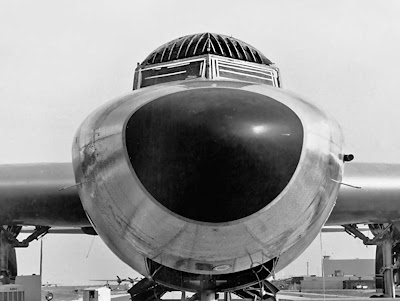 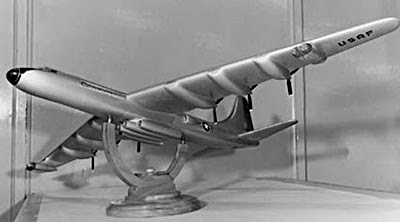 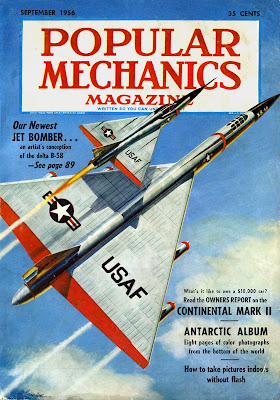 This 1956 Popular Mechanics gives a hint to one of our favorite bombers- the B-58 "Hustler"
This was a Mach 2 medium bomber that pushed 1950's technology to the limit and beyond.
--------------
Looks like that Delta Dart is taking "fighter cover" under the sheets!
No comments: 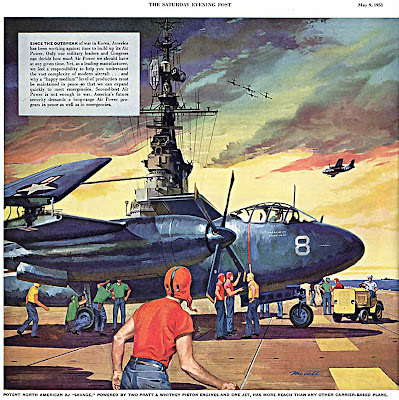