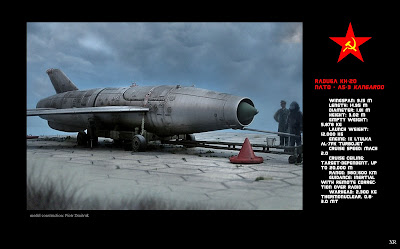 The Raduga Kh-20 (NATO codename AS-3 Kangaroo) was an early Soviet 'cruise missile' armed with a 3 megaton thermonuclear warhead. Similar in design and engineering to a Mig-19 jet fighter the Kangaroo was a 'stand-off' weapon that could be launched from a semi-recessed position on the underbelly of a Tu-95 Bear bomber at a distance of 200-300 miles from the target.

So, if you lived in a Midwestern industrial center like Cleveland you could expect your nuclear doomsday to be delivered by one or more of these ugly beasts streaking down from the heavens in a 1400 mph dive!


... these rather wonderful scale models were built by: Piotr Dmitruk