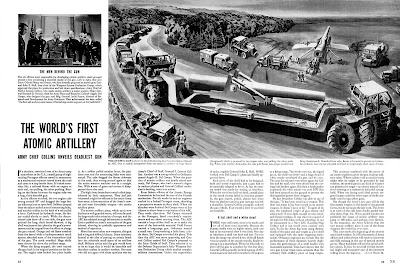 ... twenty of these behemoth artillery pieces were built and deployed in Europe and Korea. When first conceived the US Army did not have readily available missiles for battlefield use. Since NATO plans called for using small 'tactical' atomic bombs to halt an invasion of a much larger Soviet force delivering those bombs in the form of a very large artillery shell made some sense. The M65 'Atomic Cannon' fired a 280mm (11 inch) shell holding a W9 15 kiloton warhead. Range was 20miles.

The classic Renwal 1/32 model kit of the M-65 has been reissued by Revell: http://www.internetmodeler.com/scalemodels/armor/Revell-1-32-Renwal-Atomic-Cannon.php