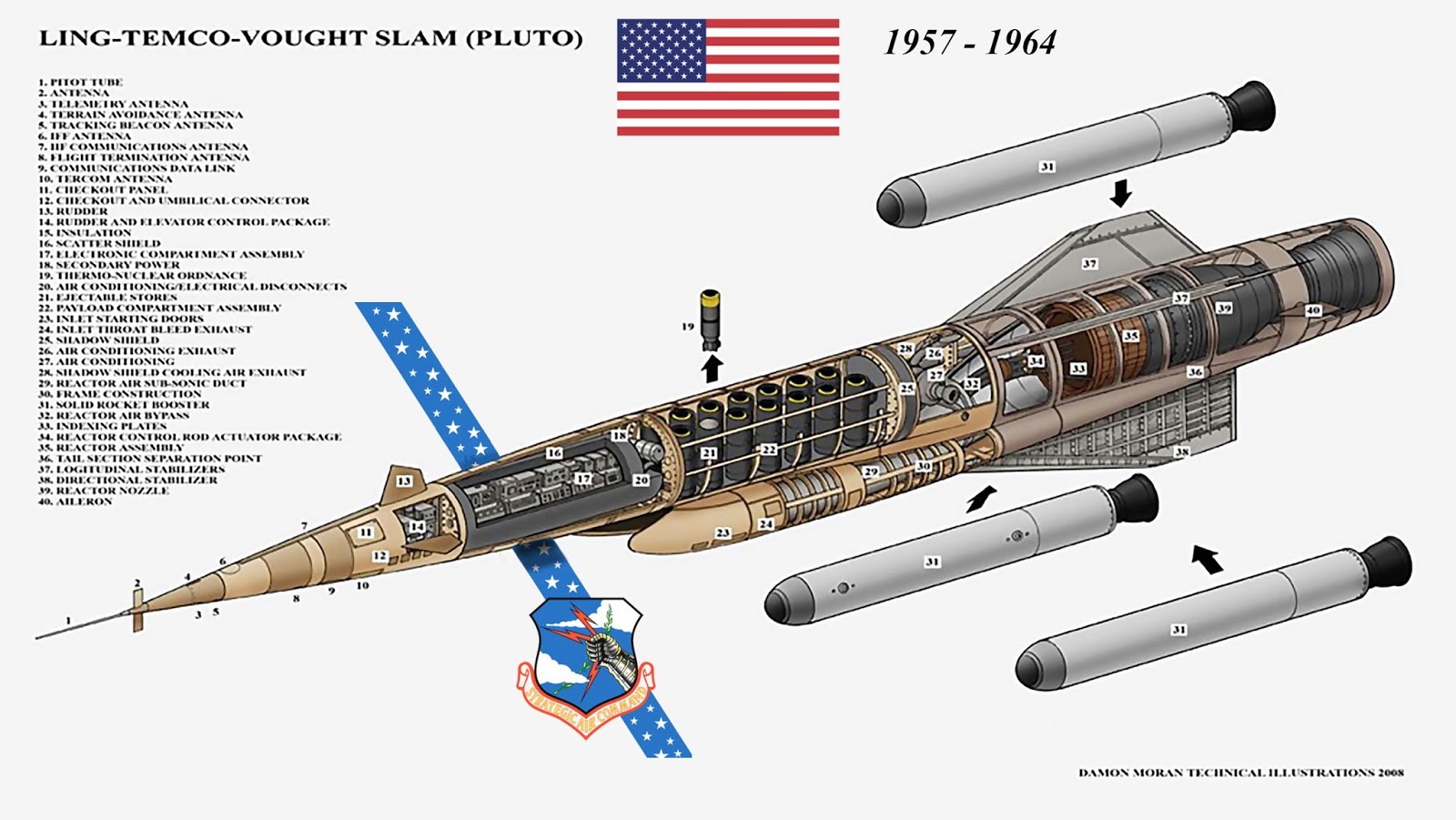 ... there was never a shortage of bizarre and frightening atomic weapon system proposals during the Cold War.   One of the scariest (that has recently come to light) was this late 1950's proposal for a Supersonic-Low-Altitude-Missile (SLAM) powered by an atomic ramjet! One of it's several code-names was CROWBAR!

Before rocket technology had become the reliable backbone of silo and submarine based ICBM's various jet-powered, unmanned, "robot bombs" were either proposed or actually deployed. (see: SNARK and REGULUS). These early "cruise-missiles" relied on vacuum-tube technology, had limited range, low speed and during tests had an alarming tendency to wonder off on sight-seeing excursions of their own!

1957 was a time of big dreams for powering aircraft with atomic reactors. They actually built and tested some of these 'small" reactors turned into ram-jets. An atomic propulsion system of this type would be very powerful. It could propel the above pictured design at Mach 3 speeds (2,000mph) - even at treetop level. It would be invulnerable and unstoppable by the air defenses of the time. It consumed and carried no conventional fuel and used the incredible heat of it's reactor to instantly expand oncoming air for thrust-propulsion. A 'ram-jet' functions much like it sounds; once it's brought up to working speed by auxiliary jets or rockets [#31], it simply RAMS air into a compressed space where it is ignited with fuel (or in this case pushed through a white hot reactor core [#35, #39] ).


Because it was unmanned, there was no need for the huge weight of radiation shielding normally associated with an atomic reactor. Moreover- the prodigious amount of unshielded radiation would probably kill anyone below it's low flight-path and poison the surrounding terrain. Some engineers speculated that, as it screamed above the Russian treetops, the Mach 3 shockwave [by itself] would be lethal. The fuselage would have space for 12 or more hydrogen bombs [#19] . These would pop-out for detonation as the target whizzed by. In true Dr. Stranglove style, even after the bomb-load had been exhausted, the missile could zip back and forth over enemy territory for days or weeks- zorching everyone and everything below. Because of the unlimited range of such an atomic powered aircraft they could be be pre-positioned just outside of the airspace of the USSR like sharks on an endless prowl.

Thankfully this nightmare weapon system never got far beyond the proof of theory engine tests. Full-scale testing of such a monster would have been, to say the least, a daunting task. I think it also fell right into the category of "fuckin-nuts!". This was an area of just plain mean and nasty weapons that were "destabilizing" to the Arms Race. In deterrence you want a balance of terror - and not a bunch of Commissars running up and down the corridors of the Kremlin bug-eyed and frothing at the mouth! (source for diagram)

... as an interesting side-note. In 1958 a b-grade science-fiction movie was released with an all too familiar sounding plot ... could this have been a mere coincidence- hmmm? Get out the pop-corn- the trailer is followed by the whole thing! 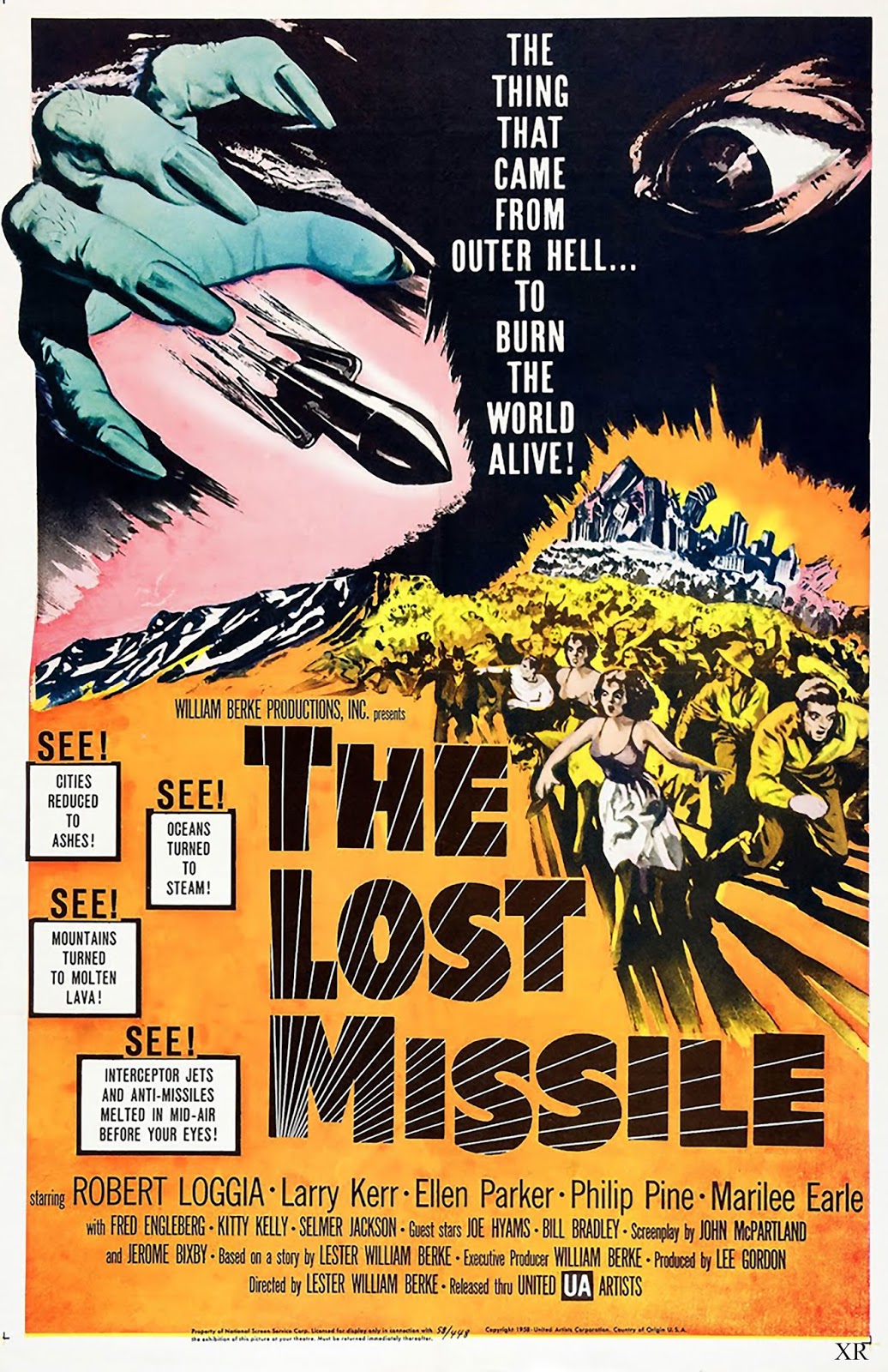